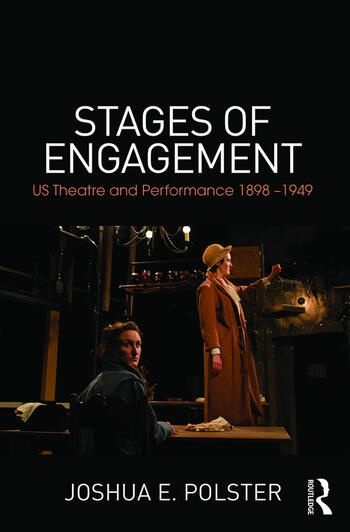 Stages of Engagement is a compelling and wonderfully varied account of the relationship between theatre in the United States and the social, cultural, and political forces that shaped it during one of the most formative periods in the nation’s history.

Joshua E. Polster applies key thematic perspectives – Colonialism, Religion, Race and Ethnicity, Gender and Sexuality, Economic Systems, and Systems of Government – to seminal moments in US history. In doing so he explores the ways in which the theatre has responded to these turning points, through the work of some of its principal dramatists, directors, designers, and theatre companies.

His approach tackles questions such as:

• How did the plays of this period reflect the nation’s concerns and anxieties?

• How did theatre, culture, and politics interconnect as the United States took to the world stage?

• Which critical viewpoints are most useful to us when examining these cultural phenomena?

• How did performances and productions attempt to influence their audiences' social and civic engagement?

On its own, or in tandem with its companion volume The Routledge Anthology of US Drama 1898–1949, this is the ideal text for any course in US Theatre. By examining each cultural moment from a range of critical perspectives and drawing upon a diverse range of sources, it is designed specifically for today’s interdisciplinary and multicultural curriculum.

Introduction  1. “Setting the Stage: War and Empire”  2. “The Pan-American Exposition and Tragedy Onstage”  U.S. Immigration, Ethnic Theatres, and Vaudeville, by Stuart Hecht  3. “Gendered Spaces: Law and Justice in Susan Glaspell’s Trifles”  The Sexual Revolution and Broadway, by Sue Abbotson  4. A New Approach to Revolution: Artef and Hirsch Leckert in the Third Period  The Theatre of War: The Rise of Fascism, Anti-War and Interventionist Theatre, by Jim Fisher  5. Salesman and the 1930s Theatres of Social Protest

Joshua E. Polster is Associate Professor of Theatre at Emerson College. His publications include Reinterpreting the Plays of Arthur Miller, a critical edition of Miller’s A Memory of Two Mondays, and The Routledge Anthology of US Drama 1898–1949.

Stages of Engagement and its companion text, The Routledge Anthology of Drama 1898 – 1949 would serve as excellent text resources for courses in American Drama or for continued exploration of this topic by researchers.

- Steve Earnest, The Journal of American Drama and Theatre

‘This useful, aptly titled compilation of essays is engaging reading for those seeking to better understand the forces that contributed to early-20th-century performance—among them colonialism; religion, race, and ethnicity; gender and sexuality; and economic and government systems…Polster includes contributions of other authors to give readers a different valence on allied subjects. For example, his excellent account of how Susan Glaspell’s Trifles utilized the testimony of an actual criminal trial is paralleled by Susan Abbotson's fascinating study of Mae West’s legal imbroglios with her own playwriting. Polster's examination is most welcome…Summing Up: Recommended.’

"Stages of Engagement is ambitious, claiming to incorporate major thematic approaches including colonialism, religion, race, gender, and economics, among others, over a fifty-year period in U.S. theatre [...] it lives up to this goal."

- Elizabeth A. Osborne, Florida State University, A Journal of Theatre and Performance of the Americas