State Fragility Around the World
Fractured Justice and Fierce Reprisal 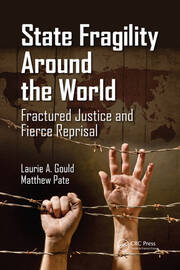 State Fragility Around the World: Fractured Justice and Fierce Reprisal

Failed and fragile states often govern through the criminalization of otherwise inconsequential or tolerated acts. These weak states also frequently use kidnapping, murder, and other violent or oppressive tactics to maintain order and stay in power. State Fragility Around the World: Fractured Justice and Fierce Reprisal analyzes the path to state failure, one manifestation of which appears through the fragility and dysfunction of its criminal justice system. This book examines what happens when a government loses the ability, or will, to provide basic goods and services to its constituents.

Acknowledging the tremendous variability of failed and fragile states, the case studies and analyses contained in this book suggest the existence of functional and structural attributes common across most state systems. The authors explore the plights of various states in which key elements related to their criminal justice systems are weak or fragile. States under examination include Mexico, Afghanistan, Iran, Syria, and Georgia. Special attention is given to Somalia, Sudan, and South Sudan, which serve as examples of what happens to a state that fails in virtually all aspects of governance.

Using a unique approach, State Fragility Around the World articulates a specific method for assessing relative state fragility. Using this method, natural groupings of relative fragility and stability evolve, providing an unprecedented way to compare social phenomena and functionality across national and regional borders. Readers will also gain a deeper understanding of what it means to be a fragile state as well as how state fragility affects core freedoms, the criminal justice process, and mechanisms of punishment.

Laurie A. Gould is an associate professor of criminal justice and criminology at Georgia Southern University in Statesboro, Georgia. She was previously an assistant professor of the same at the University of Texas at Arlington. She received her PhD in public affairs, with a specialization in criminal justice, from the University of Central Florida in Orlando. Her primary areas of expertise focus on state fragility, comparative penology, and gender disparities. Her work has been published in a variety of journals, including The British Journal of Criminology, Violence Against Women, and Women & Criminal Justice. She is also the coauthor of the book Corporal Punishment Around the World. She is an active member of the Council on Undergraduate Research, where she serves as both a councilor and issue editor for The CUR Quarterly.

is a senior research fellow and lecturer with the Violence Research Group in the School of Criminal Justice at the State University of New York, University at Albany. In addition to a doctorate in criminal justice, he also holds an undergraduate degree in history as well as advanced degrees in sociology and environmental design. His research centers on comparative criminal justice and the history of crime. He has published extensively on matters of race, inequality, and disparity. He is a former law enforcement executive and has served as a consultant to police agencies across the United States.