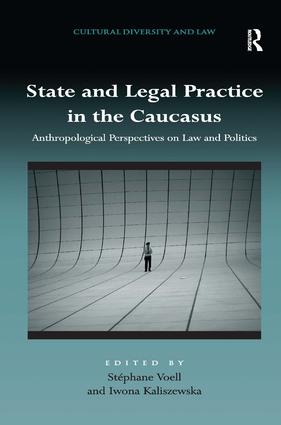 State and Legal Practice in the Caucasus

Legal pluralism and the experience of the state in the Caucasus are at the centre of this edited volume. This is a region affected by a multitude of legal orders and the book describes social action and governance in the light of this, and considers how conceptions of order are enforced, used, followed and staged in social networks and legal practice. Principally, how is the state perceived and how does it perform in both the North and South Caucasus? From elections in Dagestan and Armenia to uses of traditional law in Ingushetia and Georgia, from repression of journalism in Azerbaijan to the narrations of anti-corruption campaigns in Georgia - the text reflects the multifarious uses and performances of law and order. The collection includes approaches from different scholarly traditions and their respective theoretical background and therefore forms a unique product of multinational encounters. The volume will be a valuable resource for legal and political anthropologists, ethnohistorians and researchers and academics working in the areas of post-socialism and post-colonialism.

’The timely drive to advance our understandings of legal pluralism is finding some of its richest material in the Caucasus past and present. This excellent volume, bringing together a model cohort of scholars from within the Caucasus and beyond, tells us why.’ Bruce Grant, New York University, USA ’In the large body of literature on strong societies and weak states� the Caucasus has until now been neglected - this book fills this important gap. Some of the leading regional experts show us that even the Soviet state, though arguably strong if not totalitarian�, could never manipulate the local ethnic societies on an ideological whim. This volume opens a fruitful conversation on the modern uses of customary norms and informality.’ Georgi Derluguian, New York University Abu Dhabi, United Arab Emirates and author of Bourdieu’s Secret Admirer in the Caucasus: A World-System Biography ’The contributors - some from the Caucasus and some from elsewhere, younger researchers as well as those who experienced the last years of the Soviet Union - bring an impressive diversity of theoretical stances and field experiences to bear on the themes of the state, politics and law in the lives of people from the South and North Caucasus. I believe this stimulating and useful collection will make a significant contribution to political and legal anthropology, as well as post-Soviet studies.’ Kevin Tuite, Université de Montréal, Canada ’The contributors to this book ask how people effectively deal with legal pluralism as an endemic condition of the Caucasus� and make sense of this co-existence of different legal frameworks, no matter if connected to a state or not. From a political anthropological perspective in their diverse field studies they are connecting micro with macro levels and thus challenge Eurocentric assumptions. A very inspiring book about an increasingly interesting region.’ Oliver Reisner, Ilia State University, Georgia

Stéphane Voell is Lecturer at the Department for Cultural and Social Anthropology at the Philipps-University Marburg, Germany. He has carried out fieldwork in Georgia and Albania and organized numerous workshops, conferences and student excursions in the Caucasus. He specializes in law, state, ethnicity and conflict. Iwona Kaliszewska is Assistant Professor at the Institute of Ethnology and Cultural Anthropology at the University of Warsaw, Poland. She has carried out fieldwork in Dagestan and Chechnya which resulted in a book ’Matrioshka in Hijab’, co-authored by Maciej Falkowski. She specializes in political anthropology and Caucasus area studies.

Around the world, most states are faced with difficult issues arising out of cultural diversity in their territories. Within the legal field, such issues span across matters of private law through to public and constitutional law. At international level too there is now considerable jurisprudence regarding ethnic, religious and cultural diversity. In addition, there are several layers of legal control - from communal and religious regulation to state and international regulation. This multiplicity of norm setting has been variously termed legal pluralism, inter-legality or inter-normativity and provides a fascinating lens for academic analysis that links up to cultural diversity in new and interesting ways. The umbrella of cultural diversity encompasses various population groups throughout the world ranging from national, ethnic, religious or indigenous groupings. This series particularly welcomes work that is of comparative interest, concerning various state jurisdictions as well as different population groups.