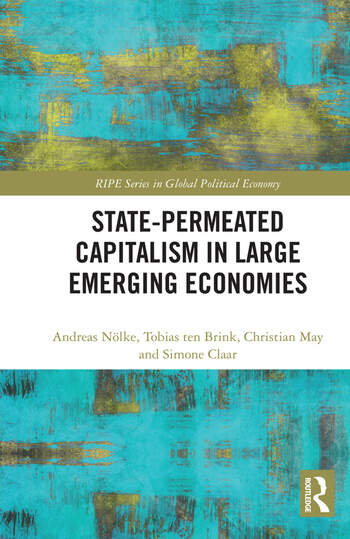 This book systematically analyzes the economic dynamics of large emerging economies from an extended Comparative Capitalisms perspective. Coining the phrase ‘state-permeated capitalism’, the authors shift the focus of research from economic policy alone, towards the real world of corporate and state behaviour.

On the basis of four empirical case studies (Brazil, India, China, South Africa), the main drivers for robust economic growth in these countries from the 2000s until the 2010s are revealed. These are found, in particular, in mutual institutional compatibilities of ‘state-permeated capitalism’, in their large domestic markets, and beneficial global economic constellations. Differences in their institutional arrangements are explored to explain why China and India have been more economically successful than Brazil and South Africa. The authors highlight substantial challenges for the stability of state-permeated capitalism and assess the potential future growth, sustainability and likely pitfalls for these large emerging economies.

Opening further avenues for empirical and theoretical research, this book raises questions for the future of the global economic order and should appeal to academics, graduate students and advanced undergraduates in politics, economics, economic sociology and development studies. It should also prove a worthwhile and provocative read for development practitioners and policy-makers.

1.3 Extending Comparative Capitalisms research: The role of the state in emerging economies

1.5 Comparative Capitalisms extended: A framework for the analysis of economic dynamics in large emerging economies

2.2 Coordination in the Chinese political economy

2.3 The institutional foundations of Chinese capitalism

3.2 Coordination in the Indian political economy

3.3 The institutional foundations of Indian capitalism

Chapter 4 Brazil: On the way to becoming a state-led economy (again)?

4.2 Coordination in the Brazilian political economy

4.3 The institutional foundations of Brazilian capitalism

Chapter 6 The contours of state-permeated capitalism

6.1 The outcome: Growth in global perspective

6.5 An ideal type of state-permeated capitalism

7.3 Economic exhaustion? The resilience of state-permeated capitalism in difficult times

7.4 Political exhaustion? Inequality and the rise of the middle classes

Tobias ten Brink is Professor of Chinese Economy and Society and director of the China Global Center at Jacobs University Bremen, Germany.

Christian May is Senior Researcher at the Department of Political Science at Goethe University, Germany.

Simone Claar co-leads the research group ‘Glocalpower’ at the Department of Political Science at University of Kassel, Germany.

"This important book broadens the scope of comparative capitalism in two dimensions. It goes beyond the limits of the traditional ‘firm-based’ varieties of capitalism approach to analyse a novel model of capitalism characterized by close state-business relationships. This book also pushes the usual geographical boundaries of the genre, and focuses on usually neglected though increasingly important emerging economies (Brazil, India, China, South Africa). A must read for any scholar of comparative capitalism." - Bruno Amable, Professor of Economics at the University of Geneva, Switzerland.

"This is a challenging book. While mainstream economists continue to put all their coins in the market, four political economists show that fast growing emerging economies adopt a state-permeated capitalism. I oppose the successful developmental capitalism of China and India to the unsuccessful economic liberalism of Brazil and South Africa – the four countries studied in this book. State-permeated and developmental capitalism are the same thing – an economic system where the market coordinates the competitive sectors, while the state, the non-competitive industries and the macroeconomy. Or, in the words of the authors, a system where there is an "informal cooperation between individual national capitalists and representatives of state agencies". - Luiz Carlos Bresser-Pereira, Emeritus Professor at the Getulio Vargas Foundation and former Minister of Finance of Brazil.

"The research team has developed an eclectic and viable framework for a study of emerging market economies based on, but going beyond, the Comparative Capitalism perspective, by adding in important historical and comparative dimensions. Their method also transcends the firm-level focus of the regional varieties of capitalism approach (VOC) and its more macro-foundations framework will be warmly welcomed by scholars in political economy, development studies, sociology and international relations. It is a timely and useful intervention in the context of the rapidly changing balance of economic power in the contemporary world economy through focusing on the key characteristics of the capitalisms of the larger and varied market economies of the Global South." - Vishnu Padayachee, Distinguished Professor and Derek Schrier and Cecily Cameron Chair in Development Economics, School of Economic and Business Sciences, University of the Witwatersrand, South Africa.

"This ambitious work takes the BRICS beyond an investment option to a systematic political and economic examination. The analysis ranges widely across careful country studies while adding in the international political economy usually lacking in the "varieties of capitalism" framework. Deftly organized and deeply researched, this book greatly advances theoretical debates on comparative capitalism in developing countries." - Ben Ross Schneider, Ford International Professor of Political Science and director of the MIT Brazil program.

"Every so often you come across a book which imparts the smack of something original and important enough to rank as a "must read" for a long time. This is such a book. It stands on the shoulders of three main fields of knowledge about "the wealth of nations" – varieties of capitalism, comparative politics, and international political economy; and paves the way for lots of follow ups. Believers in neoliberal philosophy may not approve of much of it, but they should read it first and then pick a fight." - Robert H. Wade, Professor of Global Political Economy, London School of Economics, UK.