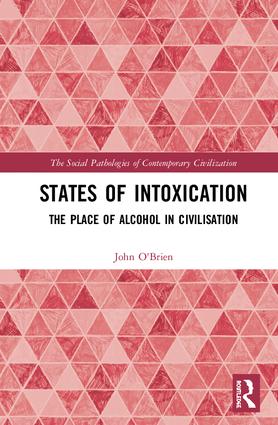 The Place of Alcohol in Civilisation, 1st Edition

This book provides an illuminating perspective on alcohol use, drawing on approaches from both anthropological research and historical sociology to examine our ambivalent attitudes to alcohol in the modern West. From anthropological research on non-Western, non-modern cultures, the author demonstrates that the use of alcohol or other psychoactive substances is a universal across human societies, and indeed, has tended to be seen as unproblematic, or even a sacred aspect of culture, often used in a highly ritualised context. From historical sociology, it is shown that alcohol has also been central to the process of state formation, not only as a crucial source of revenue, but also through having an important role in the formation of political communities, which frequently are a source of existential fear for ruling groups. Tracing this contradictory position occupied by alcohol over the course of history and civilisation, States of Intoxication sheds light on the manner in which it has produced the very peculiar modern perspective on alcohol.

3. Alcohol And The Ritual Process: Identity

4. Alcohols And The Ritual Process: Decontrolling 5. The Limits Of Ritual 6. Proto States And Potlatches 7. Subversive States: The Case Of Russia 8. States, Revenue And Interdependence 9. The Politics Of Centralisation: Consumption And Taxation* 10. Peace, Violence And Trauma Conclusion

John O’Brien is a Lecturer in Sociology at Waterford Institute of Technology.

The Social Pathologies of Contemporary Civilization

The Social Pathologies of Contemporary Civilization

Breaking decisively with the often ideological and moralistic approach of treating problems of health and well-being as discrete and individual problems to be addressed in isolation both from one another and their broader social contexts, this series pursues the investigation of the ways in which contemporary malaises, diseases, illnesses and psychosomatic syndromes are related to cultural pathologies of the social body and disorders of the collective ésprit de corps of contemporary society. It avoids reductive psychological and biomedical understandings of pathologies - including depression, stress-related illnesses, eating disorders, suicide and deliberate self-harm - to focus instead on the socio-cultural contexts in which they occur, examining the radical changes to social structures and institutions, and the deep crises in our civilization as a whole to which such conditions are connected. The Social Pathologies of Contemporary Civilization thus welcomes manuscripts from a broad range of disciplinary perspectives across the humanities and social sciences - sociology, philosophy, psychology, anthropology, politics, economics and cultural studies, as well as from the fields of medicine social care, therapeutic practice and the healing arts - that explore the fruitfulness locating health and well-being not simply in the individual body or soul, but within a trans-disciplinary imagination that takes into account the integral human person’s situatedness within collective social bodies, particular communities, entire societies, or even whole civilizations.