Statistics for the Behavioural Sciences
An Introduction 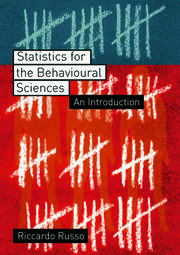 Statistics for the Behavioural Sciences: An Introduction

Do you find statistics overwhelming and confusing? Have you ever wished for someone to explain the basics in a clear and easy-to-follow style? This accessible textbook gives a step-by-step introduction to all the topics covered in introductory statistics courses for the behavioural sciences, with plenty of examples discussed in depth, based on real psychology experiments utilising the statistical techniques described. Advanced sections are also provided, for those who want to learn a particular topic in more depth.
Statistics for the Behavioural Sciences: An Introduction begins with an introduction to the basic concepts, before providing a detailed explanation of basic statistical tests and concepts such as descriptive statistics, probability, the binomial distribution, continuous random variables, the normal distribution, the Chi-Square distribution, the analysis of categorical data, t-tests, correlation and regression.
This timely and highly readable text will be invaluable to undergraduate students of psychology, and students of research methods courses in related disciplines, as well as anyone with an interest in the basic concepts and tests associated with statistics in the behavioural sciences.

'This is an outstanding introductory text that will appeal to instructors for its attention to detail, and to students for its clarity.' - Thom Baguley, Loughborough University

'This book explains how students can understand the basic concepts of statistical inference. I enjoyed reading it and would definitely recommend it to my students.' - Naz Derakshan, University of Leeds

'I like this book a lot and would recommend it to my undergraduate students.' - David Clark-Carter, Staffordshire University