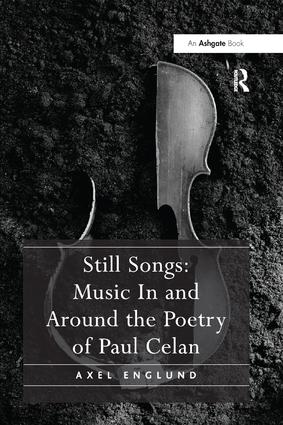 Still Songs: Music In and Around the Poetry of Paul Celan

What does it mean for poetry and music to turn to each other, in the shadow of the Holocaust, as a means of aesthetic self-reflection? How can their mutual mirroring, of such paramount importance to German Romanticism, be reconfigured to retain its validity after the Second World War? These are the core questions of Axel Englund's book, which is the first to address the topic of Paul Celan and music. Celan, a Jewish Holocaust survivor who has long been recognized as one of the most important poets of the German language, persistently evoked music and song in his oeuvre, from the juvenilia to the posthumous collections. Conversely, few post-war writers have inspired as large a body of contemporary music, including works by Harrison Birtwistle, György Kurtág, Wolfgang Rihm, Peter Ruzicka and many others. Through rich close readings of poems and musical compositions, Englund's book engages the artistic media in a critical dialogue about the conditions of their existence. In so doing, it reveals their intersection as a site of profound conflict, where the very possibility of musical and poetic meaning is at stake, and confrontations of aesthetic transcendentality and historical remembrance are played out in the wake of twentieth-century trauma.

'This impressive debut book uses music, both as sound and as idea, to cut through the conventional wisdom about Paul Celan and to forge a more nuanced, more complex view of Celan's poetics than the one afforded by the legends that have accumulated around the poet. Axel Englund shows with meticulous argument and in lucid prose that Celan's lifelong return to figures of music forms a key arena for the playing out of his conflicted identity as a modern poet, and in particular as a poet whose modernity is over determined - but far from exhausted - by his experience as a survivor of the Holocaust.'

'Axel Englund's sophisticated study of Paul Celan combines the insights of a philologist with the keen ear of a composer-musicologist. It illuminates not only the extraordinary role that music plays in Celan's conception of poetry, but also the singular impact his work has had on contemporary classical music. A milestone in Celan studies.'

’The strength of the study lies in its broadly based examination of poems and musical compositions from every phase of Celan’s work’.

Axel Englund is Associate Professor of Literature at Stockholm University, Sweden. His research is primarily concerned with interrelations between the arts and media, in particular the music and poetry of the modernist era. His other fields of interest include twentieth-century exile literature, concepts of aesthetic authenticity, and representations of gender and sexuality in opera. In 2011, Englund was an Anna Lindh Fellow at Stanford University (Freeman Spogli Institute of International Studies) and he has held visiting scholarships at Columbia University (Department of Germanic Languages and Literatures) and Freie Universität Berlin (Institut für Theaterwissenschaft).