Stories of True Crime in Tudor and Stuart England 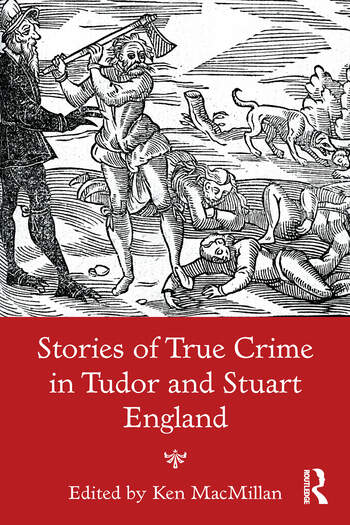 Stories of True Crime in Tudor and Stuart England

Stories of True Crime in Tudor and Stuart England is an original collection of thirty stories of true crime during the period 1580-1700. Published in short books known as chapbooks, these stories proliferated in early modern popular literature. The chapbooks included in this collection describe serious, horrifying and often deeply personal stories of murder and attempted murder, infanticide, suicide, rape, arson, highway robbery, petty treason and witchcraft.

These criminal cases reveal the fascinating complexities of early modern English society. The vivid depictions of these stories were used by the English church and state to describe the proper boundaries of behaviour, and the dangers that could result from the sins of avarice, apathy, vice or violence. Readers will learn about the public interest and involvement in crime and punishment and the way the criminal justice system was used to correct and deter criminal activity and restore social boundaries such as rank, gender, family, religion, and physical boundaries of person and property.

Perfect for the student reader, this collection provides guided access to these exciting sources. Each transcription is modernized and annotated and is preceded by a brief discussion of key historical context and themes. Including an introductory essay on the topic of the English criminal justice system in the early modern period, as well as a glossary of key terms in English criminal law, this is an ideal introduction for students of crime and criminal justice in England.

List of Illustrations Acknowledgements Introduction 1.The Blood-Thirsty Papist 2.The Jealous Mercer and the Smitten Lover 3. The Strange Discovery of Sundry Murders 4. The Boy Without Any Fear 5. The Minister’s Mutilation and Murder 6. The Cock-A-Doodle-Doo Miracle 7. The Death of a Bawd 8.The Cripple’s Complaint and the Strumpet’s Repentance 9. The Hog-Keeper and Her Daughter 10. The Gentlewoman’s Unnatural Crimes 11. The Unhappy Litigant 12. The Life and Death of a Churlish Knave 13. The Witches of Faversham 14. The Baronet at the Bar 15. The Child-Killer of St. Olave  16. The Cavalier Killer Gets Pressed 17. The Gardener’s Gallows Reprieve 18. The Murderous Siblings of Monmouth 19. The Widow’s Murder 20. The Drover’s Suicide 21. The Roasted Apprentice 22. The Ordinary’s Work 23. The Beastly Highwaymen 24. The Fire in the Garrett  25. The Penitent Apprentice 26. The Common Witch, Goody Buts 27. The Madness of Mary Philmore 28. The French Midwife’s Miserable Moan 29. The Wicked Life of Captain Harrison 30. The Soldier and the Magpie Glossary Bibliography

Ken MacMillan is Professor of History at the University of Calgary, Canada, where he researches and teaches about crime, law, and society in early modern England and the English Atlantic. His previous books include Sovereignty and Possession in the English New World: The Legal Foundations of Empire (2006) and The Atlantic Imperial Constitution: Center and Periphery in the English Atlantic World (2011).

"This collection provides an excellent source book, which gathers together a wide range of primary sources on the history of crime and presents them in a highly accessible way that is particularly useful for undergraduates studying the subject for the first time. The introduction provides a very effective and concise summary of existing debates, and a clear and well-signposted route into this exciting and important historical subject. The great strength of this collection is the richness of the sources that it provides for the sixteenth and seventeenth century, which adds important historical depth to a subject that has focused in recent years more on the records of the Old Bailey and the eighteenth century."

"Ken MacMillan’s Stories of True Crime is both a treasury of early modern true crime stories and a valuable resource for instructors and students of early modern legal, social and cultural history. The author has painstakingly selected, edited, transcribed and annotated a broad range of early modern criminal accounts: some indeed sensational and bloody, others more prosaic, but all of them compelling and instructive, shedding light on both the legal and larger social and cultural contexts of crime and punishment in late Elizabethan and Stuart England. Readers will benefit from the author’s clear and cogent introductory sections, legal and historical overviews, and explanatory notes. In an age in which the sheer volume of early modern print available digitally can be overwhelming, MacMillan’s collection is all the more useful, and timely, in that it provides a judicious selection of some of the most striking and evocative examples of the genre."