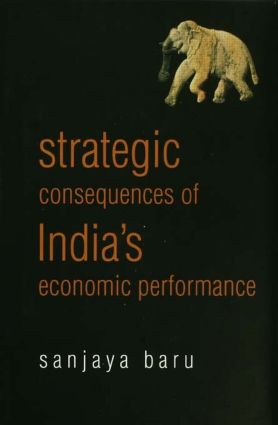 In this book, Sanjaya Baru, one of India’s most respected commentators on political and economic issues, pays close attention to the strategic consequences of India’s increasingly impressive economic performance. The new turn in India's economic policies and performance in the last decade of the twentieth century; the success of Indian enterprise in the post-WTO world; the emergence of a confident professional middle-class; a demonstrated nuclear capability; and the resilience of an open society and an open economy, in the face of multiple and complex challenges, have all shaped India's response to the tectonic shifts in the global balance of power in the post-Cold War era.

In this collection of academic essays and newspaper columns, Baru explores the business of diplomacy and the diplomacy of business in a rising India. The role of India's cultural and intellectual 'soft power' in shaping global perceptions of India are examined. The book offers a panoramic view of the geopolitics and the geo-economics of India's recent rise as a free market democracy, and as such will interest both experts and lay readers.

'A collection of Baru's journalistic greatest hits … brilliant scene-setting essays analysing the strategic choices that have faced India since it started to open its economy 15 years ago … make it required reading for anyone interested in the interplay between domestic economic strategy and global power politics.' – Financial Times

'Sanjaya Baru is one of the bright lights of modern India. Before most others in journalism, academia, or politics, he was able to see the immense opportunities for India created by globalization and a new international atmosphere. In this fine collection of essays Baru analyzes these issues, which lie at the crossroads of economics, politics, and public policy. Free of old thinking and tired cliches, Baru writes clearly and convincingly.' – Fareed Zakaria, editor, Newsweek International and author, The Future of Freedom

'These are superbly crafted and insightful writings on economic and security issues. No one who wishes to follow India … can afford to ignore this splendid collection. Buy, read, profit, and enjoy.' –Jagdish Bhagwati, Columbia University

1. The Strategic Consequences of India's Economic Performance 2. The Economic Dimension of India's Foreign Policy 3. Conceptualising Economic Security 4. National Security in an Open Economy 5. Stewing in our Own Juice 6. India and the World: Learning to Walk on Two Legs 7. The Economics of National Security 8. The Bombay Plea 9. Competitive Advantage: Merit, Markets and the Middle Class 10. The Fruits of Economic Diplomacy 11. The Madrid Impasse: India and G-9 Stand Up to be Counted 12. Intimations of Greatness: The Challenge of Realising India's Potential 13. Diplomatic Business: Trade and Flag in Today's World 14. The Strategic Imperative 15. Brinkmanship Blues: Memories of a Near Forgotten Crisis 16. Economic Sanctions in War on Terror 17. Not an Advisable Advisory 18. Who Wants Charity? 19. Who is Afraid of Globalisation? 20. Sizing up the Competition 21. Doing our Own Thing 22. A Jaswant Singh Doctrine on Foreign Aid 23. India Launches FTA Spree before Cancun 24. The Business of Foreign Policy 25. Slower Track WTO versus Fast Track FTAs 26. Foreign Trade is also about Imports 27. An Open Market and an Open Society 28. How Asian is India? 29. India and ASEAN: The Emerging Economic Relationship towards a Bay of Bengal Community 30. The Asian Economic Crisis and India's External Economic Relations 31. South Asian Dialogue: Business of Peace and Security 32. Tackling Trust, Trade and Terrorism 33. A Win-Win Race in South Asia 34. South Asia can Rise and Shine Together 35. Economic Consequences of J&K Elections 36. The Business of other Neighbours 37. IT and the e-Economy: The Ballast for India-US Relations 38. India, China and the Asian Neighbourhood: Issues in External Trade and Foreign Policy 39. Mr. Rao goes to Washington 40. Beyond Nuclear Policy: A Wider Perspective on Signing CTBT 41. Who's Afraid of Entities List? 42. Dotcom Diaspora: World Wide Web of Overseas Indians 43. Terms of Engagement 44. Long and Short of India-US Relations 45. The Big Deal about No Big Deal 46. India and US: Out of the South Asia Box 47. Putin Russia in Perspective 48. G-8 Summit: Not Just because it's There 49. Business in Command China's Cultural Counter-Revolution 50. Manhattan of the East: Wandering and Wondering in China 51. Pacific Blues: The US-China Face-Off 52. The Chinese Art of Economic Diplomacy 53. The New Great Game: APEC, ASEAN+3 and now JACIK, an Alphabet Soup in a Changing Asia 54. Business beyond Borders: India-China Relations Show the Way for India-Pakistan Relations 55. An Eagle's Eye on the Dragon 56. Is India a Paper Tiger? 57. The Coming of Age of Korea Inc. 58. State and Market in Foreign Policy 59. The Economic Consequences of the Kargil Conflict for India and Pakistan 60. Geography of Business: Time, Space and Technology 61. Media Multiplier: Soft Power of Indian Software 62. Widen that Lens 63. An India of Narayana Murthy or Sudarshan?