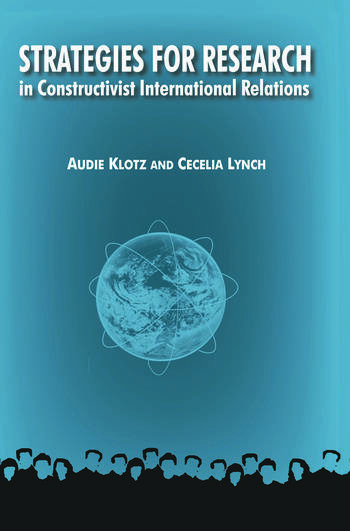 Constructivism's basic premise - that individuals and groups are shaped by their world but can also change it - may seem intuitively true. Yet this process-oriented approach can be more difficult to apply than structural or rational choice frameworks. Based on their own experiences and exemplars from the IR literature, well-known authors Audie Klotz and Cecelia Lynch lay out concepts and tools for anyone seeking to apply the constructivist approach in research. Written in jargon-free prose and relevant across the social sciences, this book is essential for anyone trying to sort out appropriate methods for empirical research.

The first edition of "The Political Economy of Chinese Socialism" reconceptualized the political economy of China by highlighting the changing character of urban-rural and state-society conflicts in the era of Mao Zedong's leadership and in the contemporary post-Mao reforms. The economic and social crises that engulfed China - and indeed much of the rest of the socialist world - in the late 1980s, culminating in the 1989 democratic movement and its suppression, stimulated a rethinking of central propositions of the first edition. It particularly led the author to inquire anew into the meaning of socio-political as well as economic development in a populous and poor agrarian nation. This volume, then, assesses the economic performance and social consequences of China's political economy over four decades, with a focus on China's countryside and city-countryside relations. In addition to a reconceptualization and updating of the introductory chapter, there is a new chapter, "The Social Origins and Limits of the Chinese Democratic Movement".