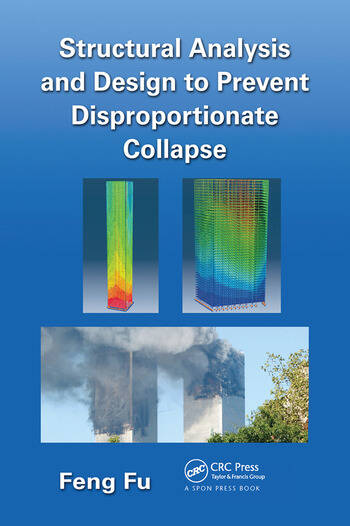 Disproportionate collapse is a pressing issue in current design practice. Numerous causes are possible – especially forms of extreme loading, such as blast, fire, earthquake, or vehicle collisions. But it is the mechanism and its prevention which are of especial interest and concern.

After the World Trade Center collapse in 2001, interest was sparked, and it is now imperative for a design engineer to have sufficient knowledge on both the analysis and design against disproportionate collapse. Detailed structural design guidance for preventing this has been developed in Europe and the US – such as BS5950 in the UK, and guidance from the Department of Defense and the General Services Administration in the US. However, Structural Analysis and Design to Prevent Disproportionate Collapse is the first systematic text in the market to help design engineers or structural engineering students to properly understand this guidance.

Dr. Feng Fu received his PhD from the University of Leeds and his MBA from the University of Manchester. He is a chartered structural engineer, a member of the Institution of Structural Engineers, a member of the Institution of Civil Engineers and a Member of the American Society of Civil Engineering. He is currently a lecturer in structural engineering at City University, following his work as a lecturer at the University of Bradford. Prior to that, he worked for several consultancy companies, such as the WSP Group, the Waterman Group, and the Beijing Institute of Architectural Design and Research. During his industrial practice, he was involved in the design of extensive prestigious construction projects worldwide. He also gained experience in designing buildings under extreme loadings, and knowledge in designing buildings to prevent progressive collapse.

"This book can be used by students, engineers and researchers as a unique source, as it contains necessary theories, numerical procedures, design strategies and use of commercial software. The real scenario case studies offer insight and understanding of this most disastrous form of structural failure."
—Jianqiao Ye, Lancaster University, UK

"It is of major practical interest and I would definitely recommend it for design engineering offices and lecturers in structural mechanics."

"This book attempts to advance the state of the art by showing how to create computer models of large structures that are then subject to an "event" to see if the subsequent collapse is progressive."

"An excellent introduction to the progressive collapse of structures that will allow the understanding of the basic aspects of this phenomenon and help improve structural designs. … This is a compact and clearly written book that the reader will find easy to read."
-- Jose M. Adam, in Journal of Performance of Constructed Facilities, ASCE