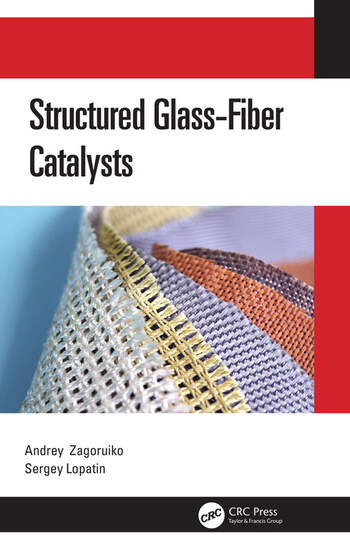 Structured Glass-Fiber Catalysts discusses the synthesis of advanced glass-fiber catalysts for various emerging applications, investigation of their properties, and development of the engineering basis required for their wide practical application.

This book describes how to create and use such catalysts for different chemical reactions. It discusses how to efficiently arrange them into structured catalytic cartridges and gives examples of their successful application for purification of waste gases from different hazardous contaminants and environmentally safe combustion of fuels. It covers nanosize surface science fundamentals through large-scale commercial catalytic reactors.

Professor Andrey Zagoruiko, Doctor of Technical Sciences (rehab.), Leading Researcher of Boreskov Institute of Catalysis, Novosibirsk, Russia, graduated in 1985 from Moscow Institute of Fine Chemical Technology. He has over 30 years of experience in research, development, engineering and simulation of catalytic reactors and catalytic processes. His area of scientific and practical interests include unsteady-state catalytic processes, reverse-flow reactors, sulfur production from H2S, oxidation of SO2, deep oxidation of volatile organic compounds, micro-fibrous catalysts, and naphtha reforming. He is author of more than 300 scientific publications, including over 70 patents. He is permanent member of scientific and program committees of international conferences ChemReactor and HydroCat, guest editor in Chemical Engineering Journal and Catalysis Today, member of editorial boards in the journals Reviews in Chemical Engineering and Catalysis in Industry. He was awarded the Russian Academy Award in the name of Professor Koptyug, golden medals of Russian Exhibition Center and Siberian Fair for developments on the area of environmental protection technologies.

Sergey Lopatin, Group Leader at the Boreskov Institute of Catalysis, Novosibirsk, Russia, graduated from Kuzbass Polytechnic University. He is expert in the area of mass transfer studies in the catalytic structures, engineering of catalytic processes, development and modelling of catalytic reactors design, creation of new shapes of catalysts and novel technologies for their manufacturing. He has over 13 years of experience in scientific work and his scientific and practical interests include catalytic processes on the base of micro-fibrous catalysts for purification of waste gases from hazardous organic contaminants and for environmentally safe combustion of fuels and organic wastes. He is author of more than 80 scientific publications, including over 30 patents.