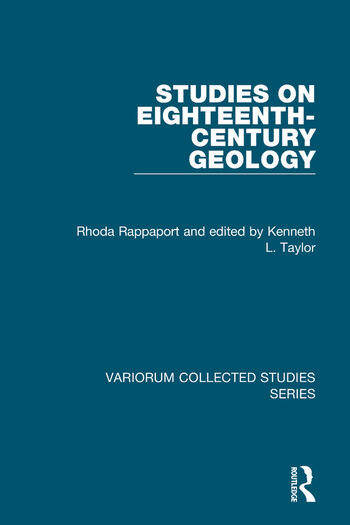 In a scholarly career spanning five decades, Rhoda Rappaport published perceptive analyses of science in the culture of early Modern Europe, France in particular, with strong emphasis on geology's early development. Of the sixteen papers in this volume, most focus on aspects of geology's cultivation during the 'long' 18th century, from the times of Hooke, Leibniz, and Fontenelle to those of Lavoisier, Werner, and Cuvier. Among the topics most closely treated here are the French mineralogical mapping project initiated by Guettard; contemporary efforts to interpret the earth historically (such as through Noah's Flood); and difficulties presented by the vocabulary often used in traditional histories of geology. Much of Rappaport's research addressed two problems prevalent within 18th-century earth science: the proper understanding of petrifactions, or fossil objects; and struggles to establish reliable knowledge of the earth's past. She also examined the chemistry of G.-F. Rouelle, which she saw as effectively an attempt at systematic comprehension of the entire mineral realm; trans-national features of scientific pursuits as illustrated in the careers of the naturalist Vallisneri and the mineralogist (and philosophe) d'Holbach; and aspects of science's promotion in France through government patronage and academic privilege.

’[Rhoda Rappaport’s work] remains impressive for its detail, its erudition, its clarity and its impressively thorough examination of complex issues, all viewed through the lenses provided by detailed and extensive archival researches. As mentioned already, her contributions were of a quality and scholarly influence that were out of all proportion to their bulk.’ Metascience ’... this volume provides [...] rich insights on how the thought of an innovative historian of science evolves, turns to unexpected facts, broadens its scope and eventually addresses a variety of initially unforeseen questions along with their diverse ramifications.’ History of Geo- and Space Sciences 'This book is a deserved memorial volume...' Archives of Natural History 'The collection brings together a fine selection of important articles published by one of the leading twentieth-century experts on the social and scientific foundations of early modern geology.' Ambix