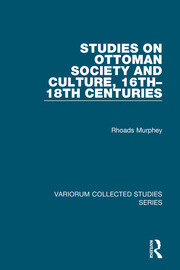 The studies presented in this collection are concerned most particularly with the material conditions of life in the mature Ottoman state of the 16th-18th centuries. They range from the evaluation of sources of livelihood and conditions in the workplace on the one hand, to notions of domesticity and organization of the private sphere on the other, and deal with the provinces, in both the Balkans and in Asia, as much as with Istanbul. At the same time the volume aims to illuminate Ottoman imperial institutional forms and norms as they existed in the high imperial era before the rapid change and transformation associated with late imperial times when the empire was more exposed both to global economic forces and external political pressures. This concentration on the relatively stable conditions that prevailed in the empire throughout the bulk of the early modern era (ca. 1450-ca. 1750) provides the reader with an opportunity to assess Ottoman institutional development and observe social and economic organization in their relatively 'pure' state before the double impact of industrialization and increasing Westernization in the late nineteenth century.

Contents: Preface; Part 1 Cultural Relations and Exchange of Ideas: Ottoman medicine and transculturalism from the 16th through the 18th century; Westernisation in the 18th-century Ottoman empire: how far, how fast?; Bigots or informed observers? A periodization of pre-colonial English and European writing on the Middle East; The Ottoman attitude towards the adoption of Western technology: the role of the efrenci technicians in civil and military applications. Part 2 Urban Living: Provisioning Istanbul: the state and subsistence in the early modern Middle East; Communal living in Ottoman Istanbul: searching for the foundations of an urban tradition; Disaster relief practices in 17th-century Istanbul: a brief overview of organizational aspects of urban renewal projects undertaken in the aftermath of catastrophic fires; The city of Belgrade in the early years of Serbian self-rule and dual administration with the Ottomans: vignettes from Rashid's History illuminating the transformation of a Muslim metropolis of the Balkans. Part 3 Population Groups, Population Movements, Production and Organisation of Labour: Some features of nomadism in the Ottoman empire: a survey based on tribal census and judicial appeal documentation from archives in Istanbul and Damascus; Ottoman census methods in the mid-16th century: 3 case histories; The conceptual and pragmatic uses of the 'summary' (idjmal) register in 16th-century Ottoman administrative practice; Population movements and labor mobility in Balkan contexts: a glance at post-1600 Ottoman social realities; Silver production in Rumelia according to an official Ottoman report circa 1600; Tobacco cultivation in northern Syria and conditions of its marketing and distribution in the late 18th century; The construction of a fortress at Mosul in 1631: a case study of an important facet of Ottoman military expenditure; Index.

Dr Rhoads Murphey is Reader in Ottoman Studies in the Centre for Byzantine, Ottoman and Modern Greek Studies, University of Birmingham, UK.

'... this work is extremely useful for scholars studying administrative practices as well as economic and societal interactions within the Ottoman Empire. The articles are well written and are arranged to complement each other. it makes this work much more valuable than just the sum of its parts. The use and analysis of primary source documents in all of the articles greatly enhances the value of this work and makes the bibliography and citations of each article extremely valuable for scholars of this period.' Sixteenth Century Journal