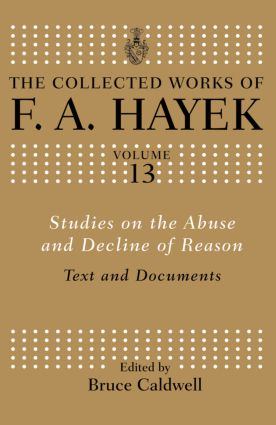 Studies on the Abuse and Decline of Reason

"The studies of which this book is the result have from the beginning been guided by and in the end confirmed the somewhat old-fashioned conviction of the author that it is human ideas which govern the development of human affairs," Hayek wrote in his notes in 1940. Indeed, Studies on the Abuse and Decline of Reason remains Hayek’s greatest unfinished work and is here presented for the first time under the expert editorship of Bruce Caldwell.

In the book, Hayek argues that the abuse and decline of reason was caused by hubris, by man’s pride in his ability to reason, which in Hayek’s mind had been heightened by the rapid advance and multitudinous successes of the natural sciences, and the attempt to apply natural science methods in the social sciences.

Editorial Foreword. Introduction. Prelude Individualism: True and False Part 1: Scientism and the Study of Society 1. The Infl uence of the Natural Sciences on the Social Sciences 2. The Problem and the Method of the Natural Sciences 3. The Subjective Character of the Data of the Social Sciences 4. The Individualist and ‘Compositive’ Method of the Social Sciences 5. The Objectivism of the Scientistic Approach 6. The Collectivism of the Scientistic Approach 7. The Historicism of the Scientistic Approach 8. ‘Purposive’ Social Formations 9. ‘Conscious’ Direction and the Growth of Reason 10.Engineers and Planners Part 2: The Counter-Revolution of Science 11. The Source of the Scientistic Hubris: L’Ecole Polytechnique 12. The "Accoucheur d’Idées": Henri de Saint- Simon 13. Social Physics: Saint- Simon and Comte 14. The Religion of the Engineers: Enfantin and the Saint- Simonians 15. Saint- Simonian Infl uence 16. Sociology: Comte and His Successors Part 3: Comte and Hegel 17. Comte and Hegel Appendix: Related Documents Some Notes on Propaganda in Germany (1939). Selected Correspondence, F. A. Hayek to Fritz Machlup (1940– 41). Preface to the U. S. Edition (1952). Preface to the German Edition (1959). Acknowledgments. Index.

Bruce Caldwell is Professor of Economics at the University of North Carolina, Greensboro