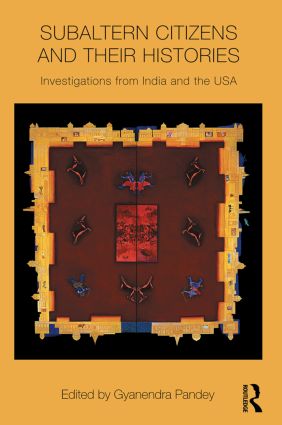 Subaltern Citizens and their Histories

Investigations from India and the USA, 1st Edition

Deploying the provocative idea of the ‘subaltern citizen’, this book raises fundamental questions about subalternity and difference, dominance and subordination, in India and the United States. In contrast to other writings on subordinated and marginalized people, the essays presented here devote deliberate attention to diverse locations of subalternity: in the conditions and histories of slaves, dalits, peasants, illegal immigrants, homosexuals, schoolteachers, women of noble lineage; in the Third World and the First; in pre-colonial, colonial and postcolonial times.

With contributions from a diverse group of distinguished scholars, the anthology explores issues of gender and sexuality, migration, race, caste and class, education and law, culture and politics. The very juxtaposition of different bodies of scholarship serves to challenge common perceptions of inherited histories – claims to American and Indian ‘exceptionalism’ – and promotes a new awareness, not only of shared histories and shared struggles in the making of the modern world, but of particularities and facets of our different histories and societal conditions that are assumed as being well understood, and hence often taken for granted.

Subaltern Citizens and Their Histories will be essential reading for scholars of colonial, postcolonial and subaltern studies, American studies, US and South Asian social science and history.

Gyanendra Pandey is Arts and Sciences Distinguished Professor in the Department of History, Emory University. A founding member of the Subaltern Studies collective and editor of the Intersections: Colonial and Postcolonial Histories book series at Routledge, he is one of the leading theorists and originators of the subaltern studies approach and has published widely in the field of colonial and postcolonial studies.

This series is concerned with three kinds of intersections or conversations: first, across cultures and regions, an interaction that postcolonial studies have emphasized in their foregrounding of the multiple sites and multi-directional traffic involved in the making of the modern; second, across time, the conversation between a mutually constitutive past and present that occurs in different times and places; and third, between colonial and postcolonial histories, which as theoretical positions have very different perspectives on the first two ‘intersections’ and the questions of intellectual enquiry and expression implied in them. These three kinds of conversations are critical to the making of any present and any history. Thus the new series provides a forum for extending our understanding of core issues of Human society and its self-representation over the centuries.

While focusing on Asia, the series is open to studies of other parts of the world that are sensitive to cross-cultural, cross-chronological and cross-colonial perspectives. The series invites submissions for single-authored and edited books by young as well as established scholars that challenge the limits of inherited disciplinary, chronological and geographical boundaries, even when they focus on a single, well-recognized territory or period.