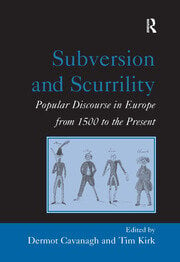 Subversion and Scurrility: Popular Discourse in Europe from 1500 to the Present

Gossip, rumour, scandal and defamation are just some of the popular discourses examined in this collection of essays by an international group of scholars. Featuring research on a wide range of resource materials (including political literature, police reports, drama, ballads, contemporary fiction, poetry and caricatures) the volume provides an introduction to the history and sociology of dissent. Each chapter explores instances of subversion and scurrility in a particular historical context. Emphasis is placed on the political culture of early modern Britain where new relationships between the state and society were pioneered. From this base further chapters proceed to discuss manifestations of these relationships in other societies and during other periods. Subversion and Scurrility reveals that while the ways in which opposition is expressed are infinitely variable, the impulse to protest is a constant.