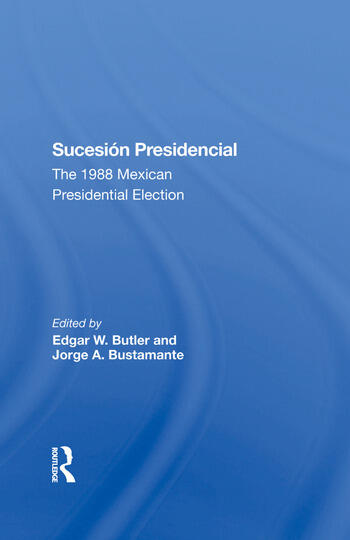 The 1988 presidential election in Mexico was the beginning of a new era in Mexican history. In this volume, scholars and political practitioners explore the implications of the election for the Mexican political system and for Mexico's international relationships, especially with the United States. In particular, the contributors examine the reasons for the explosive changes in the electoral system and discuss the political inheritance of President Salinas de Gortari.

Edgar W. Butler is Professor Emeritus and former Chair of the Department of Sociology at the University of California, Riverside. He holds a BA in Social Science, and a Ph.D. as well. He is the author and editor of numerous books and scientific papers on related subjects. James B. Pick is professor and former chair of the department of management and business at the University of Redlands. W. James Hettrick is the director of information systems for the City of Loma Linda, California, and the president/ceo of Information Systems Management Solutions, Inc. located in Redlands, California.