Suicide and Agency
Anthropological Perspectives on Self-Destruction, Personhood, and Power 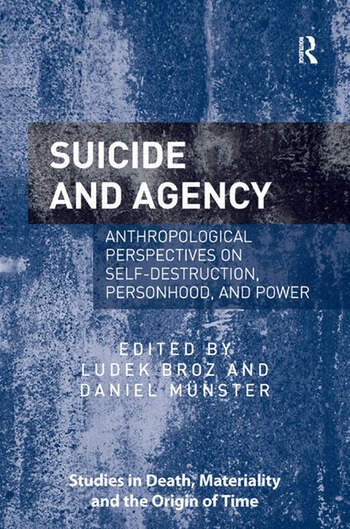 Suicide and Agency: Anthropological Perspectives on Self-Destruction, Personhood, and Power

Suicide and Agency offers an original and timely challenge to existing ways of understanding suicide. Through the use of rich and detailed case studies, the authors assembled in this volume explore how interplay of self-harm, suicide, personhood and agency varies markedly across site (Greenland, Siberia, India, Palestine and Mexico) and setting (self-run leprosy colony, suicide bomb attack, cash-crop farming, middle-class mothering). Rather than starting from a set definition of suicide, they empirically engage suicide fields-the wider domains of practices and of sense making, out of which realized, imaginary, or disputed suicides emerge. By drawing on ethnographic methods and approaches, a new comparative angle to understanding suicide beyond mainstream Western bio-medical and classical sociological conceptions of the act as an individual or social pathology is opened up. The book explores a number of ontological assumptions about the role of free will, power, good and evil, personhood, and intentionality in both popular and expert explanations of suicide. Suicide and Agency offers a substantial and ground-breaking contribution to the emerging field of the anthropology of suicide. It will appeal to a range of scholars and students, including those in anthropology, sociology, social psychology, cultural studies, suicidology, and social studies of death and dying.

Ludek Broz is a researcher at the Institute of Ethnology, The Czech Academy of Sciences, Czech Republic. Daniel MÃ¼nster is a junior research group leader in the cluster of excellence 'Asia and Europe in a Global Context' at Heidelberg University, Germany.

This volume makes an important contribution to scholarship on agency in suicide. It offers ethnographic perspectives that complicate mainstream understandings around the transculturally persistent practice of self-killing. However, as it describes living through and with suicide, it adds more. As Strathern notes in her afterword, this volume not only contributes to understanding suicide and agency through local ontologies, but also shows how suicide tells us about aspects of social life.
C.M. Cassady Wayne State University, Journal of the Royal Anthropological Institute (JRAI), 2018