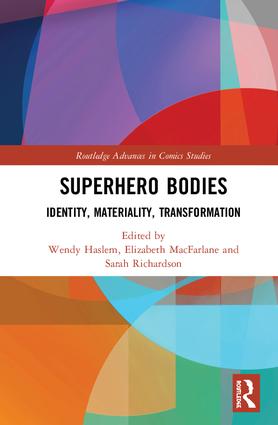 Throughout the history of the genre, the superhero has been characterised primarily by physical transformation and physical difference. Superhero Bodies: Identity, Materiality, Transformation explores the transformation of the superhero body across multiple media forms including comics, film, television, literature and the graphic novel. How does the body of the hero offer new ways to imagine identities?  How does it represent or subvert cultural ideals? How are ideologies of race, gender and disability signified or destabilised in the physicality of the superhero? How are superhero bodies drawn, written and filmed across diverse forms of media and across histories?

"In many ways, this book builds on the best work in the field currently, extending the argument and debate around the topics of identity and representation, and provides a refreshing reminder of one of the important elements of the superhero genre, the superhero body." --John McGuire, Western Sydney University, Australia

2. Poison Ivy, Red in Tooth and Claw: Ecocentrism and Ecofeminism in the DC Universe by Victoria Tedeschi

5. Supervillainy at the Interface: Recent Hollywood Supervillains and Digital-Material Dialectic by Jessica Balanzategui

6. Against Impossible Odds: Supervillain Bodies in Austin Grossman’s Soon I Will Be Invincible and Matt Carter’s Almost Infamous by Julian Novitz

7. Are Zombies Superheroes? by Henry Kamerling

8. When Superman was Grown in a Tank by Evie Kendal

9. Only Transform: The Monstrous Bodies of Superheroes by Michael Kobre

10. SheZow: When the Superhero’s Gender Play is Child’s Play by Diana Sandars

11. The Silent Superhero: Filibus, Fantômas and Judex by Wendy Haslem

Wendy Haslem researches and teaches in the Screen Studies program at the University of Melbourne.

Elizabeth MacFarlane is a writer and lecturer in the Creative Writing program at the University of Melbourne.

Sarah Richardson is a PhD candidate and tutor in the English Literature program at the University of Melbourne.