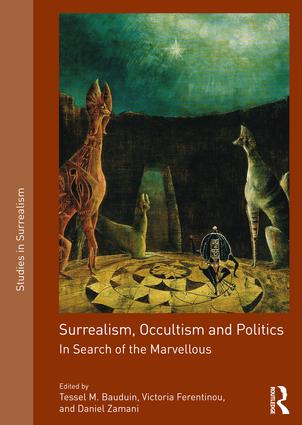 In Search of the Marvellous, 1st Edition

This volume examines the relationship between occultism and Surrealism, specifically exploring the reception and appropriation of occult thought, motifs, tropes and techniques by Surrealist artists and writers in Europe and the Americas, from the 1920s through the 1960s. Its central focus is the specific use of occultism as a site of political and social resistance, ideological contestation, subversion and revolution. Additional focus is placed on the ways occultism was implicated in Surrealist discourses on identity, gender, sexuality, utopianism and radicalism.

Introduction: In Search of the Marvellous

Part I: Alternative Modes of Knowledge

2 The Vertiginous Pursuit of the Grand Jeu: Experimental Metaphysics, Paramnesia, and Creative Involution

3 Palmistry as Portraiture: Dr. Charlotte Wolff and the Surrealists

Part II: Myth, Magic and the Search for Re-Enchantment

5 Melusina Triumphant: Matriarchy and the Politics of Anti-Fascist Mythmaking in André Breton’s Arcane 17

8 Kurt Seligmann, Surrealism and the Occult

9 The Quest for the Goddess: Matriarchy, Surrealism and Gender Politics in the Work of Ithell Colquhoun and Leonora Carrington

12 Harbingers of the New Age: Surrealism, Women and the Occult in the United States

Tessel M. Bauduin is a postdoctoral researcher and lecturer at the University of Amsterdam.

Victoria Ferentinou is assistant professor at the University of Ioannina.

Daniel Zamani is a PhD student at Trinity College, University of Cambridge and an assistant curator at the Städel Museum, Frankfurt am Main.