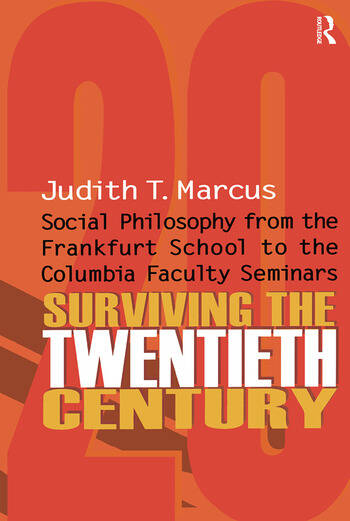 Surviving the Twentieth Century: Social Philosophy from the Frankfurt School to the Columbia Faculty Seminars

Surviving the Twentieth Century celebrates the achievements of the renowned sociologist Joseph Maier. A superb teacher and respected scholar of formidable scope, Maier's work encompassed a variety of disciplines, including sociology, philosophy, and political science. He is well known for his comparative research on Latin America as well as Jewish law and tradition. As Judith Marcus observes, Maier helped to establish comparative-historical sociology as an acknowledged field of study. This volume records and pays tribute to his scholarship and significant public service.The volume is divided into parts reflecting the breath of Maier's intellectual interests. Contributors are drawn from a variety of fields and geographical arenas. Part 1 consists of biographical interviews and personal observations on Maier and his work by Herman Berlinski, David Berlinski, Geoffrey Lloyd, Enrique Krauze and Aaron W. Warner. Part 2 includes contributions addressing some of the main themes in Maier's work: the interaction of nationalism, community and personal identity; the impact of politics on social science; culture, politics, and religion. Contributors include Abraham Edel, William Safran, Reinhard Kreckel, Zoltan Tarr, Sandro Segre, Ludwig von Friedberg, Irving Louis Horowitz, Judith Marcus, Editfi Kurzweil, Paul Neurath, Ruth Rubinstein, Andrew P. Lyons and Harriet D. Lyons, Tony Carnes, and Elfriede Uner.Part 3 reflects the impact of Maier's work on other scholars. It includes essays on philosophy, religion, literature and intellectual responsibility. Contributors include Tom Rockmore, Laurent Stern, Edmund Leites, Alfred Schmidt, Norbert Altwicker, Rita Kuczynski, Gerard Raulet, and Peter Gottwald. Part 4 covers the influence of crisis on Jewish intellectual life, and includes contributions by Herbert Strauss, Emanuel Maier, Leon A. Feldman, Hannelore Kunzl, and Johann Maier. The volume concludes, in part 5, with personal tributes to Maier by Curt C. Silberman, C. Alexander Weinstock, and Helen Hacker. The volume includes an illuminating introduction by Judith Marcus, thematic essay by Joseph Maier, and a selected bibliography of his work.Scholars who have been influenced by Maier will welcome this volume. Those who are not familiar with the scope of his contributions will benefit from the experience of seeing how his work has affected the choices of others. This is the 24th volume issued in Transaction's distinguished scholar (festschrift) series.

Judith T. Marcus is professor emeritus of sociology at the State University of New York -Potsdam. She has taught sociology at Kenyon College, Skidmore College, The College of Wooster, Rutgers University, and the New School for Social Research. She is the author of Georg Lukacs and Thomas Mann: A Study in the Sociology of Literature editor of Foundations of the Frankfurt School of Social Research and Georg Lukacs: Theory, Culture, and Politics.