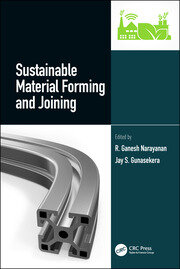 Dr. R. Ganesh Narayanan is an Associate Professor at the Department of Mechanical Engineering, Indian Institute of Technology (IIT) Guwahati, India. He received his Ph.D. from the IIT Bombay, India. His research areas of interest include Metal Forming and Joining. He has contributed many research articles in reputed journals and international conferences. He has edited few books including ‘Strengthening and Joining by Plastic Deformation’ published by Springer Singapore, ‘Advances in Material Forming and Joining’ published by Springer India, and ‘Metal Forming Technology and Process Modeling’ published by McGraw Hill Education, India. He has also edited special issues of journals including ‘Advances in Computational Methods in Manufacturing’ in the International Journal of Mechatronics and Manufacturing Systems, and ‘Numerical Simulations in Manufacturing’ in the Journal of Machining and Forming Technologies. He has organized two international conferences at IIT Guwahati namely International Conference on Computational Methods in Manufacturing (ICCMM) in 2011, and the 5th International and 26th All India Manufacturing Technology, Design and Research (AIMTDR) Conference in 2014. He has also organized a GIAN course on ‘Green Material Forming and Joining’ at IIT Guwahati in 2016.

Dr. Jay Gunasekera is an internationally recognized researcher in the area of metal forming and manufacturing. He has pioneered discoveries in the design of streamlined extrusion dies, forging and heat treatment problems, and ring rolling.

Dr. Gunasekera was the Mechanical Engineering Department Chair at Ohio University from 1991-2006. During his time as department chair, undergraduate and graduate enrollments increased significantly, two new laboratory courses for senior design and research were established, two-thirds of the current faculty were hired, and research funding increased exponentially to over two million dollars per year. Dr. Gunasekera has advised over 90 graduate students, many of who are now leaders in their respective fields. Additionally, he helped form the Center for Advanced Materials Processing (CAMP), and served as its first director.

Dr. Gunasekera was the American Editor of the Journal of Materials Processing Technology published by Elsevier. He has undertaken research and consulting projects for the United States Air Force, General Electric, Pratt & Whitney, General Motors, and a large number of forging companies.

Dr. Gunasekera has been published in over 150 technical publications and referenced in many journals and conferences. He was awarded the highest doctorate (D.Sc.) Degree by the University of London in 1991 for his contribution in research and publications in the field of manufacturing engineering. He was a Fellow of the City & Guilds of London, the highest honor conferred by that institution, and remains the only Sri Lankan to ever receive this award. He is a Fellow of SME & FRSA, past Fellow of IMechE, IProdE & IEE.