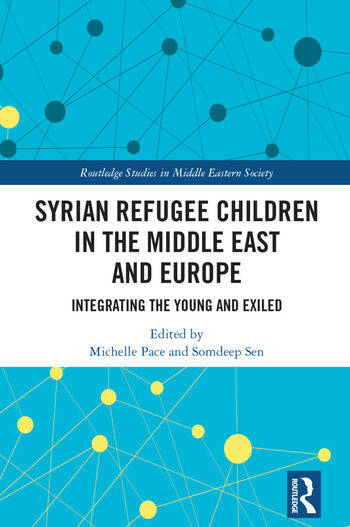 Syrian Refugee Children in the Middle East and Europe: Integrating the Young and Exiled

Since the start of the conflict in Syria in 2011, Syrian refugee children have withstood violence, uncertainty, fear, trauma and loss. This book follows their journeys by bringing together scholars and practitioners to reflect on how to make their situation better and to get this knowledge to as many front liners - across European and neighbouring countries in the Middle East - as possible.

The book is premised on the underlying conception of refugee children as not merely a vulnerable contingent of the displaced Syrian population, but one that possesses a certain agency for change and progress. In this vein, the various contributions aim to not just de-securitize the ‘conversation’ on migration that frequently centres on the presumed insecurity that refugees personify. They also de-securitize the figure and image of the refugee. Through the stories of the youngest and most vulnerable, they demonstrate that refugee children are not mere opaque figures on who we project our insecurities. Instead, they embody potentials and opportunities for progress that we need to nurture, as young refugees find themselves compelled to both negotiate the practical realities of a life in exile, and situate themselves in changing and unfamiliar sociocultural contexts. Drawing on extensive field research, this edited volume points in the direction of a new rights based framework which will safeguard the future of these children and their well-being.

Offering a comparative lens between approaches to tackling refugees in the Middle East and Europe, this book will appeal to students and scholars of refugees and migration studies, human rights, as well as anyone with an interest in the Middle East or Europe.

1. The Young and Exiled: An Introduction, Somdeep Sen and Michelle Pace

2. The EU-Turkey Deal and the Impact on Refugee Children, Michelle Pace

5. From a State of Shock to Agency in Liminality: Syrians and Their Children on the Move, Josepha Ivanka Wessels

7. The Right to have Rights of Syrian Refugee Youth: Two Stories about the Possibilities of Membership in Exile, Lisa Maren Steller

8. "They Are From a Country, and We Are From Another" - The Intersection of Education and Social Cohesion Between Syrian Refugees and their Host Community in Lebanon, Lana Khattab, Chiara Butti and Ilana Slavova

10. The Young and Exiled: A Postscript, Jennifer Skulte-Ouaiss

Michelle Pace is Professor with special responsibilities in European Union and Middle East relations at the Department of Social Sciences and Business at Roskilde University, Denmark. Her research interests include the life worlds of minor refugees, emotions in International Relations and identity politics.

Somdeep Sen is a postdoctoral researcher at the Department of Social Sciences and Business at Roskilde University, Denmark. His research interests include postcolonialism, state building, violence and spatial politics.

A timely contribution to the critical academic debate on the refugee emergency of the last few years, this new book by Michelle Pace and Somdeep Sen sheds light to the plight and challenges of Syrian refugee children. While offering new data and insights on specific integration issues such as education and rights, the book is innovative also in its approach to identity, agency and resilience of refugee children and their families. A must read for researchers, policy makers and media professionals working in the field of asylum and migration in Europe today. Anna Triandafyllidou, Professor at the Global Governance Programme (GGP) of the Robert Schuman Centre for Advanced Studies (RSCAS), European University Institute.

Syrian Refugee Children in the Middle East and Europe is a thoroughly researched, compassionate, and deep exploration of the protection issues faced by Syrian children with clear ideas about how the issues can be addressed.  Highly readable, each chapter looks at the plight and possibilities of displaced Syrians from a distinctive and valuable lens. This book is a must-read for any development, stabilization, or humanitarian response professional working on Syria, as well as for donors, the United Nations, academics, and conflict analysts. While the focus is Syrian children, anyone with an interest in conflict resolution and refugee populations anywhere would benefit reading Syrian Refugee Children. Martha Myers, former Country Director for Save the Children/Syria and CARE/Palestine

In 2012, a year into the Syrian ‘humanitarian crisis, UNICEF issued a statement that there must be ’no lost generation’ of Syrians. Yet aside from that declaration there was little action and even less research into how to proceed. This volume edited by Pace and Sen is a seminal work and makes a significant contribution to a steadily growing literature about Syria and its refugees. Focussing on the under 18 year olds, Pace and Sen takes as their starting point the ‘desecuritizing’ of the discourse around Syrian refugee children. The volume identifies the manner in which Syrian refugee youth possess a certain agency and may become the embodiment and potential of the future if properly nurtured. With chapters looking at young Syrian refugees in Lebanon, Turkey, Jordan, Denmark and the Netherlands it addresses the inherent agency of young refugees and highlights the violence, fear uncertainty and loss which they suffer as well as the potential for safeguarding their future and their well-being. Dawn Chatty, Universtiy of Oxford

Syrian Refugee Children is a powerful and carefully researched work that argues for humanity and its unbounded potential. At its core, this book is about possibility and hope, making visible and indisputable the agency of refugee children and the fact that Syria’s future ultimately resides in them. A substantive study of immense importance, Syrian Refugee Children will stand as a definitive work on its subject. Sara Roy, Harvard University

Beyond bringing together very valuable contributions not only to the field of refugee studies and the crucial issue of refugee children, Pace and Sen manage to provoke essential debates about our responsibility in the ‘refugee crisis’. Based on fieldwork among refugee children and other stakeholders, the chapters deliver poignant stories which cannot but move the reader. Leaving states in war and chaos, children with or without their families end up in detention centers, parked as sub-humans, deprived from their most basic human rights in the name of the ‘state of exception’, finding themselves in limbo in terms of citizenship. The book is not just a harsh critique of the increased securitization of European migration policies, their consequences and of the obstacles that European institutions establish in front of refugees. It is also a constructive exploration of what could be done to improve integration processes by paying attention to lessons learnt and unlearnt in Lebanon, Jordan, Turkey, Denmark, Sweden, the Netherlands and elsewhere. Eric Komlavi Hahonou, Associate Professor of International Development Studies, Roskilde University.

This book stands out by virtue of its ambition and achievement of writing about an urgent matter of concern, namely Syrian Refugee Children, their lives, agency and possibilities of finding a new home in another country. In this effort the editors have succeeded in  bringing together a vast array of people across different nationalities, including authors with a deep knowledge of Lebanon, Jordan and Turkey, and of diverse professional backgrounds too, hoping for the book and the process of making it to form part of an ongoing dialogue within research and practice communities that could enable Syrian refugee children to thrive in their diasporic lives. Conceptually, the book strikes a difficult balance between acknowledging the vulnerability of the Syrian refugee children and at the same time write about them as agentic individuals, thereby reflecting the ambition of the editors of doing activist research not only in the choice of research but in writing about it too. The book, as a result, is an exemplar of precisely activist research which is relevant and interesting to multiple audiences. Dr Lotte Buch Segal, Associate Professor, Department of Anthropology, University of Copenhagen.