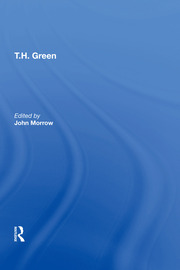 This volume collects a range of the most important published critical essays on T.H. Green's political philosophy. These essays consider Green's ethical and political philosophy, his accounts of freedom, rights, political obligation and property and the location of his political theory in the discourses of Victorian liberalism. It concludes with a selection of essays that provide comparative discussions of aspects of Green's political philosophy with positions advanced by Sidgwick, Rousseau, Kant and Hegel, and with both conservative and liberal responses to his ideas that emerged in late nineteenth and early twentieth century Japan.