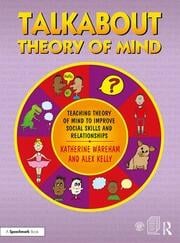 Theory of mind is a key consideration in autism spectrum conditions and is frequently associated with social, emotional, behavioural and mental health difficulties. The latest practical workbook in the TALKABOUT series, this book is designed to support those for whom theory of mind does not come naturally. It teaches strategies that can be used to identify others’ thoughts and feelings based on their behaviour, as well as to adapt behaviour in order to competently manage social situations and have positive interactions. With fully illustrated activities covering topics such as thoughts, feelings and actions, knowledge and beliefs, and respect, the programme outlined in this book can be used with children and young people to develop and confidently implement an awareness of theory of mind.

Packed full of flexible activities to suit different levels and ages, this is a vital resource for educators and therapists looking to support children and young people with poor theory of mind as they develop the skills necessary to create positive interactions.

Katherine Wareham is a Speech and Language Therapist with eight years’ experience of working with children and young adults with social communication difficulties, specialising in working with individuals on the autism spectrum and teenagers with social, emotional and mental health needs. She graduated from the University of Reading in 2011 with an MSc in Speech and Language Therapy and joined Speaking Space Ltd in 2016.

is a Speech and Language Therapist with over thirty years’ experience of working with both children and adults with an intellectual disability (learning disability) and specialising in working with people who have difficulties with social skills. She runs her own businesses (Alex Kelly Ltd and Speaking Space Ltd) with her husband Brian Sains and is the author of a number of books and resources, including the best-selling TALKABOUT series.

Alex is based in Hampshire, in the south of England. Alex Kelly Ltd provides training and consultancy work to schools and organisations in social skills, self-esteem and relationship skills around the UK and abroad. Speaking Space Ltd also provides speech and language therapy in schools in and around Hampshire, training in all aspects of autism and communication, and a Total Communication day service for adults with an intellectual disability or autism. In 2019 Speaking Space Ltd was Autism Accredited by the National Autistic Society with advanced status.