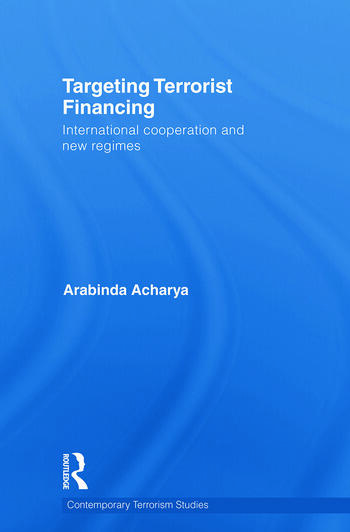 This book examines the dynamics of terrorist financing, including a discussion about the importance of money from both the terrorist and the counter-terrorist perspective.

Targeting Terrorist Financing argues that it is not the institutions that have failed the war on terrorist financing; rather it is the states that have failed the institutions. The measures contemplated by the world community to interdict terrorists and their financial infrastructures are sufficient to debilitate the terrorists both militarily and financially. However, what has been increasingly lacking is political will among the states, and this has overwhelmed the spirit of cooperation in this very critical front against terrorism.

This volume assesses the need for international cooperation and the role of institutions and regimes in targeting terrorist financing. After the 9/11 attacks, there was an expression of global willingness to target terrorism generally, and terrorist financing in particular. The institutional mechanisms that grew out of this are explored in detail here, with a critical examination of the progress made by the international community. The impact of these measures is considered with respect to changes in the nature of the terrorist threat, money confiscated, adoption of international conventions, and global standards by states, and levels of compliance, among others.

Arabinda Acharya is Research Fellow, Manager of Strategic Projects and Head of the Terrorist Financing Response Project at the International Centre for Political Violence and Terrorism Research in the S. Rajaratnam School of International Studies, Nanyang Technological University, Singapore.

Arabinda Acharya is Research Fellow, Manager of Strategic Projects and Head of the Terrorist Financing Response Project at the International Centre for Political Violence and Terrorism Research in the S. Rajaratnam School of International Studies, Nanyang Technological University, Singapore.

'This is by far the most comprehensive, incisive, and informed assessment of international efforts to combat terrorist finances.  Dr. Arabinda highlights not only the substantive successes and failures of the international community in going after the money but also the inherent limitations of international cooperation in this area.  He also offers an excellent account of the ways in which terrorists raise and move money.  For all those interested in global terrorism, this is essential reading.'
Professor Phil Williams, Professor of International Security, Graduate School of Public and International Affairs, University of Pittsburgh

'An invaluable contribution to our understanding of threat finance, Dr. Acharya has authored the definitive study on countering the financing of terrorism. A must read by practitioners and scholars.'
Professor Rohan Gunaratna, Author, "Inside Al Qaeda: Global Network of Terror"

'Arabinda Acharya has produced a very timely contribution to a growing field... Richly sourced and largely free from theory, Acharya's book identifies ways to improve the fight against terror financing as well as some limitations that will endure. In the end, this volume will prove to be an asset for researchers, officials, and practitioners alike.' - Christopher Boucek, Harvard International Review