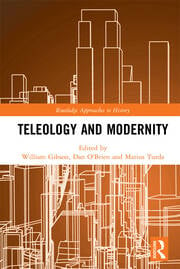 The main and original contribution of this volume is to offer a discussion of teleology through the prism of religion, philosophy and history. The goal is to incorporate teleology within discussions across these three disciplines rather than restrict it to one as is customarily the case. The chapters cover a wide range of topics, from individual teleologies to collective ones; ideas put forward by the French aristocrat Arthur de Gobineau and the Scottish philosopher David Hume, by the Anglican theologian and founder of Methodism, John Wesley, and the English naturalist Charles Darwin.

Chapter 1: ‘We Apply these Tools to our Morals’: Eighteenth-century Freemasonry, A Case Study in Teleology

Chapter 2: Teleologies and Religion in the Eighteenth Century

Chapter 3: John Wesley and the Teleology of Education

by Linda A. Ryan

Chapter 5: Charles Darwin and the Argument for Design

Chapter 7: Can the Sciences Do without Final Causes?

Chapter 8: Hume, Teleology and the ‘Science of Man’

by Lorenzo Greco and Dan O’Brien

Chapter 9: What is the Function of Morality?

William Gibson is Professor of Ecclesiastical History and Director of the Oxford Centre for Methodism and Church History at Oxford Brookes University.