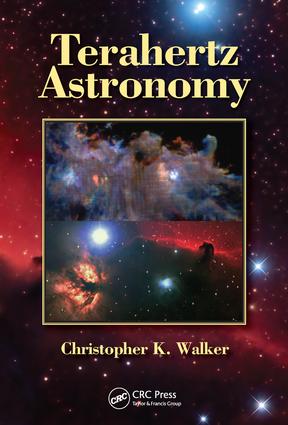 A Powerful Window into Cosmic Evolution

Terahertz (THz) observations of interstellar atoms, molecules, and dust serve as powerful probes of the conditions within the interstellar medium that permeates our galaxy, providing insights into the origins of stars, planets, galaxies, and the Universe. Taking a cross-disciplinary approach to the subject, Terahertz Astronomy explores THz astrophysics and the technologies that make this rapidly evolving field possible.

The first four chapters of the book discuss the origin and interpretation of THz light in astrophysical sources. The remaining five chapters present an overview of the technologies used to collect and detect THz light. Every chapter contains worked-out examples and exercises. The author explains each topic as intuitively as possible and includes the equations needed for real-life astrophysical applications.

In just a few years, the number of active THz researchers has substantially grown due to increased interest in terrestrial remote sensing at THz frequencies. This book provides researchers with both the background science and technology to interpret THz observations and design, build, and deploy THz astronomical instrumentation.

"The book is beautifully illustrated, having a long list of references and worked examples at the end of each chapter. I would recommend the book to students and researchers working in THz technologies and astronomy."

"This comprehensive, well-written book was a pleasure to read, an absolute must for anyone interested in learning about cutting-edge technologies and techniques revolutionizing our modern view of the Universe, and it is destined to become a standard reference work for astronomers and technologists."

"This excellent book fills a huge hole in the literature in observational terahertz astronomy. No other existing text covers the essentials of terahertz astronomy instrumentation and techniques as applied to the study of the interstellar medium. It is sure to become an essential text for those who work in the field."

"… a wonderful book, combining an insightful overview of the interstellar medium with a description of the most important techniques used to study this component of galaxies and how new stars form. It’s particularly timely, with the availability of powerful new tools, including the ALMA array, the SOFIA airborne observatory, and a range of planned and proposed suborbital and space missions in the terahertz range."

"This valuable and well-written textbook by Professor Christopher Walker helps to fill a gap in the literature describing the interstellar medium at terahertz frequencies. There are very few textbooks that discuss the medium from the observer’s point of view, showing how to determine its physical parameters from the output of the detectors. Also discussed are the operations of mixer and bolometer detectors."

"… a fundamental source for astronomers and engineers who wish to understand the physical principles and detection techniques."

"Walker’s book is incredibly timely: it introduces the basics of terahertz data but also explains the instrumentation at the level all observers need to know, and does so in friendly but, most importantly, crystal-clear prose."

"… an essential resource for all astrophysicists and experimental physicists seeking to exploit the opportunities of this last frontier in astronomy."

"The first four chapters that cover stellar evolution, atomic physics and radiation physics are the basics…. The last five are… crucial as THz data are highly dependent on the observation and calibration techniques, especially the detector technology, the improvement of which is the reason why the field has moved forward the way it is… the examples and exercises will help the readers along the way."

The Interstellar Medium at Terahertz Frequencies

ISM Components of the Milky Way

Lifecycle of the ISM

Probing the Lifecycle of the ISM

Radiative Transfer of Rotational Transitions of Linear Molecules in LTE

References appear at the end of each chapter.

Christopher K. Walker is a Professor of Astronomy and an Associate Professor of Optical Sciences and Electrical & Computer Engineering at the University of Arizona. He has over 30 years of experience designing, building, and using state-of-the-art receiver systems for THz astronomy. He is the author of numerous papers on star formation and protostellar evolution, a topical editor for IEEE Transactions on TeraHertz Science and Technology, and the principal investigator of the long-duration balloon project "The Stratospheric THz Observatory (STO)" funded by NASA.