Terrorism in the Twenty-First Century 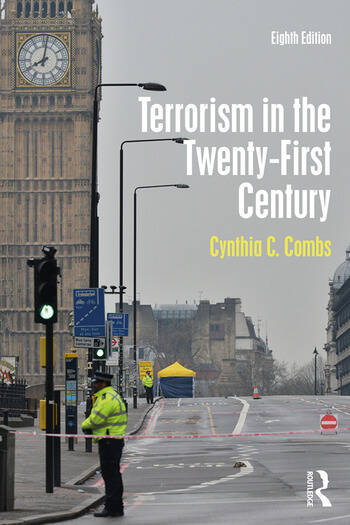 Terrorism in the Twenty-First Century

Terrorism in the Twenty-First Century helps readers understand terrorism, responses to it, and current trends that affect the future of this phenomenon.

Putting terrorism into historical perspective and analyzing it as a form of political violence, this text presents the most essential concepts, the latest data, and numerous case studies to promote effective analysis of terrorist acts. Terrorism in the Twenty-First Century objectively breaks down the who-what-why-how of terrorism, giving readers a way both to understand patterns of behavior and to more critically evaluate forthcoming patterns.

New to the 8th Edition

Part I. Terrorism in Perspective  1. An Idea Whose Time Has Come?  2. Not a Modern Phenomenon  3. Ideology and Terrorism: Rights from Wrongs?  Part II. Who Are the Terrorists?  4. Criminals or Crusaders?  5. Terrorism by the State  Part III. How Do They Operate?  6. Terrorism, Inc.  7. Terrorist Training  8. The Media: A Weapon for Both Sides?  9. Domestic Terrorism in the United States  Part IV. Responses to Terrorism  10. Legal Perspectives on Terrorism  11. The Use of Force to Combat Terrorism  12. The Use of Legislation and Intelligence Resources to Combat Terrorism  13. Security Measures: A Frail Defense  Part V. Current Trends and Future Prospects  14. The New Terrorist Threat: Weapons of Mass Destruction  15. Future Trends

is Bonnie E. Cone Distinguished Professor of Political Science at the University of North Carolina-Charlotte.

Praise for the Eighth Edition

Terrorism in the Twenty-First Century is the best book to understand the contemporary terrorist threat, its evolution, and the range of state responses to it. Cynthia Combs’ mastery of the subject makes this an easy-to-read book for students, instructors, and terrorism analysts.

Terrorism in the Twenty-First Century is one of the best introductions to the study of terrorism on the market. Cynthia Combs provides an up-to-date, well-organized, and thought-provoking overview of the discipline, and her book is thus essential reading for anyone interested in the study of terrorism and political violence. The expanded discussion of religion as a potential cause of terrorism and the addition of a section on the role of social media in radicalization and recruitment further strengthen this new edition.

Cynthia Combs's Terrorism in the Twenty-First Century takes the hysteria out of the debate on this subject. Through a plethora of excellent case studies, she provides cogent analysis that demystifies modern terrorism, while capturing the horrors of this crime against innocents. In this new edition, discussion questions in every chapter challenge the student to reassess what they think about this phenomenon. Combs provides a comprehensive overview of terrorism, the best on the market to date, setting it in its historical, political, and philosophical contexts.

University of North Carolina at Greensboro

The eighth edition of Terrorism in the Twenty-First Century offers a compelling, uniquely readable, and admirably up-to-date account of terrorism and counter-terrorism. Each chapter offers a balanced and thoughtful analysis, including specially valuable coverage of comparative counter-terrorism, international law, and ethical considerations. Cynthia Combs places the U.S. response to terrorism in comparative context by considering other developed democracies’ responses. Reminding the reader that terrorism is hardly new, she also points to social and technological changes that make understanding terrorism today especially urgent.

With Terrorism in the Twenty-First Century, Cynthia Combs has written a highly readable and accessible introductory text to the study of terrorism. This new edition expands on issues such as radicalization, social media, cyber terrorism, and lone wolves. Combs’ excellent synthesis of the research literature and deft use of case studies to illustrate points are broad enough for beginners to political science and international relations and, simultaneously, deep enough for advanced students.

I am excited to assign the eighth edition of Terrorism in the Twenty-First Century to my students. Once again, Cynthia Combs’ timely revisions reflect the evolving issues and current trends in terrorism and its study. This methodically written work is the one terrorism text that always maintains my student’s interest.

Having used this excellent text for nearly six years, I can state that this new edition is a satisfying update. With strong analysis, case studies, and discussions, Cynthia Combs empowers students to take the conceptual frameworks provided in the chapters and apply them to fast-changing events in the field. Her chosen focus on the legalities of terrorist acts, which are less biased than subjective assessments of terrorists and their groups, is valued by instructors. The book’s focus on technology and how that applies to the potential infringement – not only on personal safety but government operations, finances, and infrastructure – is always popular with students.