Testimonies of the City
Identity, Community and Change in a Contemporary Urban World 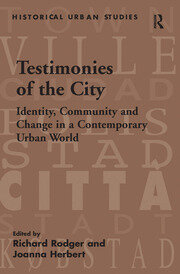 Testimonies of the City: Identity, Community and Change in a Contemporary Urban World

Oral testimony is one of the most valuable but challenging sources for the study of modern history, providing access to knowledge and experience unavailable to historians of earlier periods. In this groundbreaking collection, oral testimonies are used to explore themes relating to the construction of urban memories in European cities during the twentieth century. From the daily experiences of city life, to personal and communal responses to urban change and regeneration, to migration and the construction of ethnic identities, oral history is employed to enrich our understanding of urban history. It offers insights and perspectives that both enhance existing approaches and forces us to re-examine official histories based on more traditional sources of documentation. Moreover, it enables the historian to understand something of the nature of memory itself, and how people construct their own versions of the urban experience to try to make sense of the past. By using the full range of opportunities offered by oral history, as well as fully considering the related methodological issues of interpretation, this volume provides a fascinating insight into one of the least explored areas of urban history. As well as adding to our understanding of the European urban experience, it highlights the potential of this intersection of oral and urban history.

Richard Rodger is Professor of Urban History and Director of the East Midlands Oral History Archive at the University of Leicester, UK. Joanna Herbert is Research Fellow in the Department of Geography, Queen Mary, University of London, UK.

’The greatest strengths of the individual papers are the depth of their methodological insights and the quality of their research. The authors construct and present their methods with intellectual rigour and honesty...Unlike most edited volumes, in this case not only the editors, but also the authors have reflected on each others' work, which enhances the persuasiveness of the book. In short, Testimonies of the City is a welcome addition that speaks not only to urban historians, but to scholars across the humanities and social sciences who are concerned with historiography and methodology.’ H-Net Reviews ’... offers insights into places and moments of history that are often fascinating and surprising. As such, it shall be stimulating for readers and scholars which various research interests within, but also outside, urban studies.’ Urban Geography Research Group ’Overall there is much to recommend this book, which covers the themes of social identity, community, urban change and migration, and employs oral history methods to analyse the interaction of urban space with collective memory and identity.’ Oral History ’Despite the apparent diversity of issues, the book remains focused. Moreover, it covers some topics that are not too often examined in academic environmental philosophy. The treatment of issues is stimulating, as it combines profitably personal experiences and perceptions with sharp analysis.’ Eras Journal ’Rodger and Herbert make a valuable contribution to the history of cities...’ Economic History Review