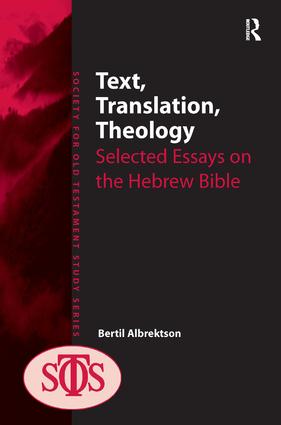 Text, translation, theology - the three nouns in the title indicate the main fields of Old Testament study which are covered in this collection of essays. Text refers both to the history of biblical texts and to problems of textual criticism. Translation of the Hebrew Bible as a philological task is a central subject in several essays. Theology does not define what the essays are but what some of them are about: religious ideologies are objects of enquiry. Bertil Albrektson gathers together a selection of his essays, some of which have become classics, which were written on separate occasions and published in different, sometimes rather remote, places. They cover more than four decades of research, and for the first time they are now brought together in this accessible volume. Bertil Albrektson is a Swedish Old Testament scholar of international repute, awarded the Burkitt Medal for Biblical Studies by The British Academy in 2003. His writing was characterized by the late Professor P.R. Ackroyd of King's College, London, as 'a model of learning, clarity and dry humour'. This volume offers a unique resource to current scholars of biblical studies.

'This is a very insightful book, well written and balanced in its approach to Old Testament textual studies. There is recognition of the qualities of Old Testament scholars, but Albrektson challenges their foibles. … simple and profound at one and the same time.' Theological Book Review

Contents: Preface; Introduction; The background and origin of the theology of Lamentations; On the syntax of 'I am who I am' in Exodus 3:14; Reflections on the emergence of a standard text of the Hebrew Bible; Some observations on two oracular passages in 1 Sam.; Difficilior lectio probabilior: a rule of textual criticism and its use in Old Testament studies; Etymological semantics: response to J.C. Greenfield; Translation and emendation; Ezekiel 30:16 - a conjecture; A disputed sense in a covenant context: on the interpretation of Genesis 15:6; Masoretic or mixed: on choosing a textual basis for a translation of the Hebrew Bible; Indexes

Bertil Albrektson was born in Gothenburg, Sweden, in 1929 and took his doctor's degree at the University of Lund in 1963, having been a research student there and at Cambridge. He was Professor of Old Testament exegesis at Ã…bo Academy in Finland 1967-76 and then moved back to his native Sweden, where he played a leading role in the Bible Translation Commission in Uppsala, which published the new official Swedish version of the Bible in 2001. Professor Albrektson is a member of several learned societies, among others the Royal Society of Sciences in Uppsala, of which he has been President, and the Royal Swedish Academy of Letters, History and Antiquities. The Society for Old Testament Study in Britain made him an Honorary Member in 1983, and he has received honorary doctorates from Edinburgh University and Ã…bo Academy. The British Academy awarded him the Burkitt Medal for Biblical Studies in 2003.