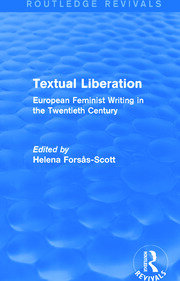 The contributors emphasize the wider contexts- political, social, economic- in which the texts were produced. They cover feminist literature in Britain, Scandinavia, Germany, Eastern Europe, Russia, France, Spain, Italy, and Turkey, and consider a range of genres, including the novel, poetry, drama, essays, and journalism. Each chapter contains an extensive bibliography with special emphasis on material available in English.

A stimulating introduction to the development of European feminist writing, Textual Liberation will be an invaluable resource for students of women’s literature, women’s studies, and feminism.

Notes on contributors;  Acknowledgements;  1. Introduction  2. Landscape for a literary feminism: British women writers 1900 to the present  3. Egalitarianism and feminine consciousness: feminist writing in Scandinavia  4. The limits of patriarchy: German feminist writers  5. Feminist writing in Eastern Europe: the problem solved?  6. The birth, death, and rebirth of feminist writing in Russia  7. Aux armes, citoyennes!  8. Feminist writers in Spain since 1900: from political strategy to personal enquiry  9. Women’s viewpoint: expectations and experience in twentieth-century Italy  10. Unmuffled voices in the shade and beyond: women’s writing in Turkish;  Index