That or Which, and Why
A Usage Guide for Thoughtful Writers and Editors 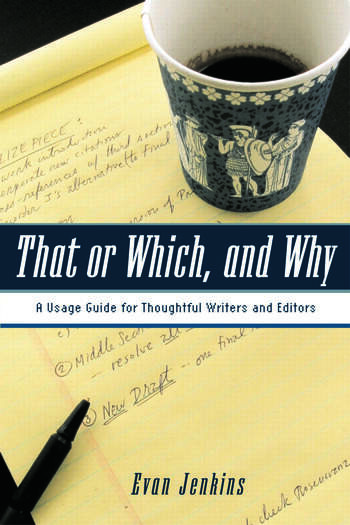 That or Which, and Why: A Usage Guide for Thoughtful Writers and Editors

That or Which, and Why is an insightful and witty guide to writing. Based on Evan Jenkins's long-running column 'Language Corner' in Columbia Journalism Review, the book is compiled of brief, alphabetically arranged entries on approximately 200 major writing stumbling blocks, from the wonderful world of 'that' and 'which' to trickier terrain like the correct usage of common idiomatic expressions.

Working from his experiences as a newsroom editor and teacher, Jenkins' humorous tone puts the reader at ease, unlike many of the writing and usage guides out there that are off-putting in their rigidity and dogmatism. He takes the 'we're-all-in-this-together' approach to teaching better writing - maintaining a light tone throughout the book and emphasizing flexibility and easy-to-use guidelines rather than delivering orders from Grammar-on-high.

"Move over, Professor Strunk. This slim volume is a clear, complete, and wonderfully witty guide to words and how to use them. It’ll never be far from my elbow."

"Evan Jenkins has produced a great collection of advice on English usage that is as entertaining as it is invaluable.  With its incisive mix of erudition, playfulness, and common sense, That or Which, and Why is an indispensable guide for anyone who wishes to write well."
--Tom Goldstein, former dean of the journalism schools at Berkeley and Columbia and co-author of The Lawyer's Guide to Writing Well

"A brilliant and entertaining romp through difficult questions of English usage. As authoritative as it is witty, it belongs on the desk of every editor, writer, and student of the language."

"Evan Jenkins’s new book is witty, wise, and passionate, but it is also refreshingly sensible.  He goes further or farther (thankfully I now know it doesn’t matter) to put usage into a context that makes sense. He also draws lines where they need drawing (who and whom still matter). Even when he treads where I am unwilling to go (either ‘compared with’ or ‘compared to’ are okay?), I have a grumbling suspicion he may be right. That or Which, and Why is a wonderful new companion to keep on my writing desk."

"Steering between word mavens who’ll smack you for violating rules that went out with silent movies—if they were ever valid—and ‘do your own thing’ linguists and dictionary-makers, Evan Jenkins’s That or Which, and Why offers sensible guidance with a firm but gentle hand."

"Even professed language experts are bound to learn something from That or Which, and Why. With wit, affection, and a good ear, author Evan Jenkins tackles dozens of questions about precise English and sorts out which rules to follow, which to ignore, and why it all matters."

That or Which, and Why, Evan Jenkins steers a beautifully pragmatic and wittily wise middle course between the fossilized ‘purists’ and the freewheeling ‘anything goes’ crowd regarding our native tongue. If you do not already have his Language Corner as one of your Web shortcuts, this volume is evidence you should—it’s so blessedly reassuring to understand the ‘why’ of the ‘what’ when you want to persuade yourself and others that English is still very much alive and kicking."

"Evan Jenkins has no time for descriptivists or their profligate tolerance (see ‘From whence’). He is just as short with prescriptivists’ dull sanctimony (relish the testiness of "First annual"). With its assured voice and vivid images (‘to be sure’ is described as pince-nez professorial), That or Which, and Why is a unique addition to worthy usage commentary."

"Evan Jenkins’s absorbing considerations about grammar, written in response to real questions and gripes from working journalists, educators and those who just love language, judiciously balance today’s common sense with yesterday’s rules. His advice can help any writer to be both clear and kind to readers."

—Seth Wigderson, Professor of History, University of Maine at Augusta

"When I was teaching writing to teenagers, I required them to buy Strunk and White's The Elements of Style. I would have required That or Which, and Why, if it had been available. It is comprehensive and lucid and, most important, written in a charming and unpedantic style. And I would have said this even if my name didn't appear in it."

"Reading Evan Jenkins is like hanging out with your favorite wise-but-hip uncle. With humor, style and genuine affection, he explains the whys, wherefores, and whences of the English language, neatly distinguishing between sense and nonsense."

"In That or Which, and Why, Evan Jenkins dishes out tough love for copy editing, giving myriad examples of the folly of following some grammar rules 'out the window.'  Instead, he implores copy editors to fight the important fights, and gives air-tight reasoning and helpful memory tools to help in those battles.  His advice is sound, and important."