The 2016 US Presidential Election and the LGBTQ Community 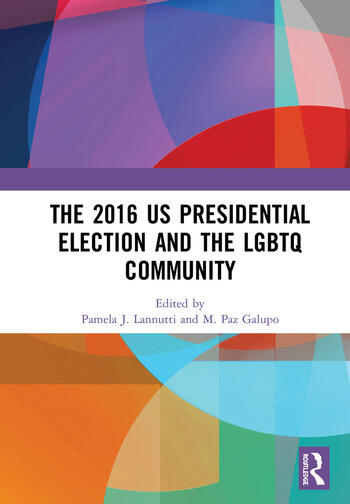 The 2016 US Presidential Election and the LGBTQ Community

In this volume, researchers explore the effects of the 2016 US Presidential Election on the LGBTQ community from a wide variety of disciplines including communication, gender studies, nursing, political science, public health, psychology, cultural analysis, and social work.

Representing qualitative, quantitative, and mixed methodological approaches, this interdisciplinary volume will appeal to students and researchers interested in the 2016 US election, and those interested in the impact of politics on marginalized communities more broadly. This book was originally published as a special issue of the Journal of GLBT Family Studies.

5. GLBTQ People Who Decided to Marry After the 2016 U.S. Election: Reasons for and Meanings of Marriage Pamela J. Lannutti

Pamela J. Lannutti is a Professor in the Department of Communication at La Salle University, Philadelphia, USA. Her research and teaching both focus on communication in personal relationships, especially the relationships of GLBTQ people.

is a Professor in the Department of Psychology at Towson University, Maryland, USA. Her research focuses on understanding the intersection of sexual orientation and gender identity as they are negotiated in the context of social and personal relationships, with a particular focus on bisexual/plurisexual and transgender experience.