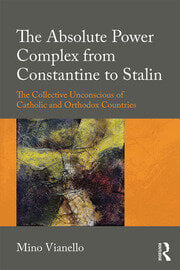 The Absolute Power Complex from Constantine to Stalin: The Collective Unconscious of Catholic and Orthodox Countries

In The Absolute Power Complex from Constantine to Stalin: The Collective Unconscious of Catholic and Orthodox Countries Mino Vianello advances a new hermeneutical paradigm in analyzing why liberal-democratic institutions and ways of life do not flourish in Catholic and Orthodox countries.

Vianello maintains that the breaking point is not the Reform, as Weber stated in the wake of de Tocqueville, but the events of the fourth century, with the Nicene Council, convoked by Constantine for the purely political purpose of giving a psychological cement to the crumbling empire, and Theodosius the Great’s decision to proclaim the Trinitarian Doctrine State Religion. These events left an indelible mark in the collective unconscious of the peoples who happened to fall into this mesh studded with neo-platonic philosophical categories and legal concepts derived from Roman Law. This book demonstrates the inception and effects of the Absolute Power Complex by linking the theological-political construction of the Church to later absolute regimes and twentieth century dictatorships. This distinguishes these countries from those Christianized by Arius’ followers, which eleven centuries later became Protestant. Vianello traces the wavering succession of philosophical and theological doctrines which have shaken Christianity, leading to a combination of politics and theology unknown to early Christians and the Evangelical Message. This is the first time that Jung’s concept of the Collective Unconscious has been historically explored in terms of political and social consequences in such an innovative and interdisciplinary way.

Mino Vianello, University of Rome "La Sapienza". Former editor of the Revue Internationale de Sociologie (1987–2005), Descartes Prize for Social Sciences in 2000 for Women and Men in Political and Business Elites - A Comparative Study in Twenty Seven Industrial Countries. Vianello has concentrated his research over the last forty years on the issue of gender and power and has authored several books that have been translated into the main languages.

"The Absolute Power Complex from Constantine to Stalin is one of those concentrated essays which can really open our eyes more than entire treaties. It points to profound, ‘hard’ archetypes which can penetrate cultures and determine history. Why, for instance, during the Cold War era in Europe was the Italian left monopolized by the Communist Party and not a Western-style socialist one? Mino Vianello explains how unconscious, ‘monopolistic’ patterns of thought, inherited during millennia from the Church, might have played a role deeper than the existence of the Soviet Union."

Luigi Zoja, former president of the International Association of Analytical Psychology and author

"Mino Vianello’s new book explains cultural and political differences among European countries, with a basic assumption that the differences are rooted in religion. Unlike Weber in the case of the birth of Protestantism in Western Europe, Vianello argues that the sources of differences among European countries are in a deep past, in the fourth century. As he writes on looking for roots of political systems in non-Protestant parts of Europe: ‘Constantine promoted a theological-political construction imbued with Neoplatonic concepts and Roman Law categories that led to a dogmatic, state-imposed doctrine totally alien to the Gospels and ignored in the Christian world up to the end of the second century, a doctrine that in the course of time shaped psychologically the peoples’ mind to submission and lack of responsibility. The heritage of the fourth century is the main hub of the Collective Unconscious that characterizes both the Catholic and the Orthodox worlds.’

"Vianello analyzes political and cultural traits in the part of Europe where Catholic and Orthodox religions are still predominant. He traces developments over centuries, arguing that Jung’s theories help to explain the propensity of the mentality of societies living in these countries. The Collective Unconscious born there was a good ground for the creation of ideologies which justified later authoritarian political systems and control over the lives of people in private and public spheres. The close relations between religious institutions and state institutions over centuries gave way in the twentieth century to the birth of fascism and communism, systems in which religious institutions were replaced by non-religious ones and expected public support because they represented the ‘truth’. In this way, they resembled religious institutions. The author describes in detail the deconstruction of Marx’s theory: the theory created in Western ideological, social, and political contexts was deconstructed by Lenin, Stalin, and others to adapt its tenets to Russian cultural, social, political, and economic context, taking it far from its original version. I believe that readers will find the book interesting and a good starting point for discussion and further studies of historical trajectories."

The new book by Professor Mino Vianello on the historical legacy and the political culture tradition inherited from the transformation of Catholicism in 325 ce under the Roman Emperor Constantine, has the meaning of a monumental revision of the roots of the concept of the Absolute Power Complex, whose influence on the countries between the Iberian Peninsula and the Urals left authoritarian marks deep in the practices of their political elites and their populations. In reality, it left undemocratic marks because of the requirement of complete subordination of individuals to the powers derived from the tradition, despite the fact that these countries claimed to be democracies.

"However perhaps the most revolutionary theoretical contribution of this book is the author´s hypothesis around the psychological roots of the concept of absolute power. Vianello recurs to Jung’s theory of the 'Collective Unconscious' to explain the existing difference in the West between, on one hand, societies where the value of freedom has become a central component of the political tradition as demonstrated by the nature of their democratic institutions, the Rule of Law, and the proclamation of human rights; and on the other hand, societies where this simply did not happen, due to the imposition – as a mere political motivated decision – of Christianity as the State Religion. After this, for a long period of time, the Church and the State operated together, according to a conception of the subordination of the members of the political community to the absolute power. Vianello links this conception to central features of Jung’s notion of the Collective Unconscious, which in the final analysis would explain why it is so difficult for some societies to evolve in a radical democratic term.

"My impression is that this book opens a completely new theoretical avenue for the understanding of some contemporary political tendencies, which are related to the undemocratic features of emerging neo-populist and right-wing governments. In this sense, the book is an enormous contribution to new areas of interests for political science and political sociology."

José Álvaro Moisés, Professor at the Department of Political Science and Senior Professor of the Institute of Advanced Studies, University of São Paulo, Brazil