The African Neogene - Climate, Environments and People
Palaeoecology of Africa 34 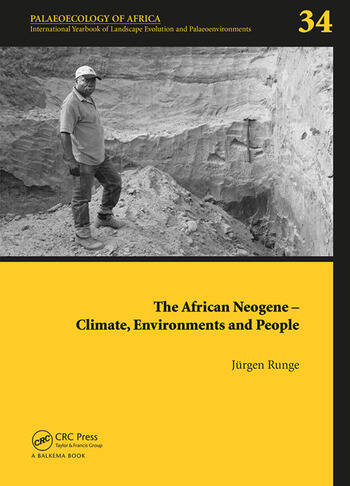 The African Neogene - Climate, Environments and People: Palaeoecology of Africa 34

During the Neogene – covering the last 23 Million years – the evolution of the environmental setting in Africa was subject to considerable changes. Natural shifts, slow and rapid, evidenced by modifications in palaeogeography, geodynamics, climate, and vegetation have caused repeated and strong changes of ecosystems in the lower latitudes. Using a variety of proxy data – researched and applied by many authors from numerous disciplines – an attempt is made to reconstruct African landscapes over space and time. Besides such spatio-temporal oscillations in recently humid, semi-humid, and dry areas of Africa, this volume of Palaeoecology of Africa (PoA) focuses on long term interrelationships between ecosystem dynamics and climate change, not ignoring the ever growing and ongoing influence of humans on natural ecosystems since the Quaternary. Regionally, this volume lays a strong focus on Nigeria (Niger Delta).

Facing the omnipresent challenges of Global Change, an increasing number of African scientists is involved in palaeoenvironmental and palaeoclimatic research, both theoretical and applied. PoA systematically supports established as well as junior African scientists in the field of sustainable cooperation and academic capacity building.

This book will be of interest to all concerned with or interested in up-to-date research on Neogene to Quaternary low latitudes ecosystem changes and their respective interpretation in the framework of natural climate and vegetation change evidenced by a variety of methods that allow to read and learn from the past by following the motto, "The geologic foretime as the key to the present, and possibly to the future." Palynologists, Geologists, Geographers, Archaeologists, and Geomorphologists will find this edition equally useful for their work.

Exploration of the Tibesti Mountains – readjustment after 50 years?

Paleoenvironments and Paleoclimates during Upper-Peistocene and Holocene periods in the Lake Kivu Western area.

Jürgen Runge is Professor of Physical Geography and Geoecology at the Goethe-University Frankfurt, Germany. As an environmentalist and consultant he has worked on the evolution of tropical landscapes and former and recent climate changes in lower latitudes for many years. Since 2005 he is the editor of the series "Palaeoecology of Africa" and a member in several scientific editorial boards. The outcome and results of his research has been used for many applied purposes such as education, regional planning, remote sensing, land use, infrastructure projects and management of natural resources.