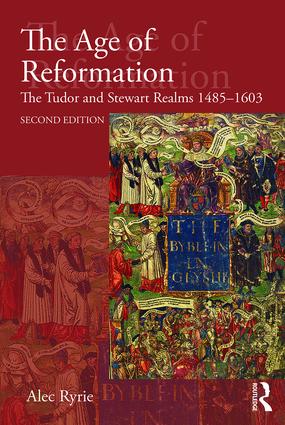 The Age of Reformation

The Age of Reformation charts how religion, politics and social change were always intimately interlinked in the sixteenth century, from the murderous politics of the Tudor court to the building and fragmentation of new religious and social identities in the parishes.

In this book, Alec Ryrie provides an authoritative overview of the religious and political reformations of the sixteenth century. This turbulent century saw Protestantism come to England, Scotland and even Ireland, while the Tudor and Stewart monarchs made their authority felt within and beyond their kingdoms more than any of their predecessors. This book demonstrates how this age of reformations produced not only a new religion, but a new politics – absolutist, yet pluralist, populist yet bound by law.

This new edition has been fully revised and updated and includes expanded sections on Lollardy and anticlericalism, on Henry VIII’s early religious views, on several of the rebellions which convulsed Tudor England and on unofficial religion, ranging from Elizabethan Catholicism to incipient atheism.

Drawing on the most recent research, Alec Ryrie explains why these events took the course they did – and why that course was so often an unexpected and unlikely one. It is essential reading for students of early modern British history and the history of the reformation.

1. The World of the Parish

9. Gaping Gulfs: Elizabethan England and the Politics of Fear

10. Reforming the World of the Parish

Alec Ryrie is Professor of the History of Christianity at Durham University. His previous publications include Protestants (2017), Being Protestant in Reformation Britain (2013), The Sorcerer’s Tale (2008), The Origins of the Scottish Reformation (2006) and The Gospel and Henry VIII (2003).

Religion, Politics and Society in Britain