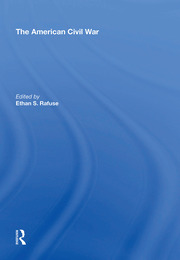 The largest and most destructive military conflict between the Napoleonic Wars and the First World War, the American Civil War has inspired some of the best and most intriguing scholarship in the field of United States history. This volume offers some of the most important work on the war to appear in the past few decades and offers compelling information and insights into subjects ranging from the organization of armies, historiography, the use of intelligence and the challenges faced by civil and military leaders in the course of America‘s bloodiest war.

Contents: Introduction. Part I The Commanders In Chief: Lincoln as military strategist, Herman Hattaway and Archer Jones; Jefferson Davis and Abraham Lincoln as war presidents: nothing succeeds like success, Ludwell H. Johnson; Jefferson Davis and the art of war, Grady McWhiney. Part II The Soldiers: The social and cultural dynamics of soldiering in Hood's Texas Brigade, Charles E. Brooks; Religion and combat motivation in the confederate armies, Samuel J. Watson; Drill, training, and the combat performance of the Civil War soldier: dispelling the myth of the poor soldier, great fighter, Mark A. Weitz. Part III Total War: Conciliation and its failure, 1861-62, Mark Grimsley; Shutting the gates of mercy: the American origins of Total War, 1860-80, Lance Janda; Was the Civil War a Total War?, Mark E. Neely Jr; Abraham Lincoln, John Pope, and the origins of Total War, Daniel E. Sutherland. Part IV Organization and Intelligence: The creation and evolution of the army corps in the American Civil War, Robert M. Epstein; Southern by the Grace of God but Prussian by common sense: James Longstreet and the exercise of command in the U.S. Civil War, Richard L. DiNardo; Neutralizing the valley: the role of military intelligence in the defeat of Jubal Early's army of the valley, 1864-65, William B. Feis; Field transportation and strategic mobility in the Union armies, Edward Hagerman. Part V Commanders: Success, failure, and the guillotine: Don Carlos Buell and the campaign for the Bluegrass State, Stephen D. Engle; Marse Robert and the Fevers: a note on the general as strategist and on medical ideas as a factor in Civil War decision making, Richard M. McMurry; 'The doom of slavery': Ulysses S. Grant, war aims, and emancipation, 1861-63, Brooks D. Simpson; McClellan and Halleck at war: the struggle for control of the Union war effort in the West, November 1861-March 1862, Ethan S. Rafuse. Part VI Naval Affairs: The other union ironclad: the USS Galena and the critical