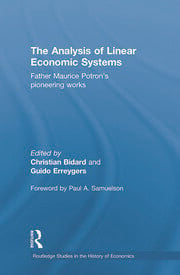 Maurice Potron (1872-1942), a French Jesuit mathematician, constructed and analyzed a highly original, but virtually unknown economic model. This book presents translated versions of all his economic writings, preceded by a long introduction which sketches his life and environment based on extensive archival research and family documents.

Potron had no education in economics and almost no contact with the economists of his time. His primary source of inspiration was the social doctrine of the Church, which had been updated at the end of the nineteenth century. Faced with the ‘economic evils’ of his time, he reacted by utilizing his talents as a mathematician and an engineer to invent and formalize a general disaggregated model in which production, employment, prices and wages are the main unknowns. He introduced four basic principles or normative conditions (‘sufficient production’, the ‘right to rest’, ‘justice in exchange’, and the ‘right to live’) to define satisfactory regimes of production and labour on the one hand, and of prices and wages on the other. He studied the conditions for the existence of these regimes, both on the quantity side and the value side, and he explored the way to implement them.

This book makes it clear that Potron was the first author to develop a full input-output model, to use the Perron-Frobenius theorem in economics, to state a duality result, and to formulate the Hawkins-Simon condition. These are all techniques which now belong to the standard toolkit of economists. This book will be of interest to Economics postgraduate students and researchers, and will be essential reading for courses dealing with the history of mathematical economics in general, and linear production theory in particular.

Christian Bidard is Professor of Economics at the University of Paris Ouest, France.

Guido Erreygers is Professor of Economics at the University of Antwerp, Belgium.