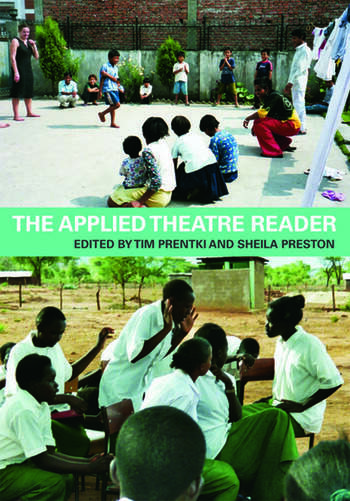 The Applied Theatre Reader is the first book to bring together new case studies of practice by leading practitioners and academics in the field and beyond, with classic source texts from writers such as Noam Chomsky, bell hooks, Mikhail Bakhtin, Augusto Boal, and Chantal Mouffe.

This book divides the field into key themes, inviting critical interrogation of issues in applied theatre whilst also acknowledging the multi-disciplinary nature of its subject.

It crosses fields such as:

This collection of critical thought and practice is essential to those studying or participating in the performing arts as a means for positive change.

Prologue: Mistero Buffo by Dario Fo  Part 1 Applied Theatre: An Introduction by Tim Prentki and Sheila Preston  Part 2: Poetics of Representation  Introduction to Poetics by Tim Prentki  Rabelais and his World by Mikhail Bakhtin  Brecht on Theatre by John Willett  Clown, Opera, the Atomic Bomb and the Classroom by Julie Salverson  Provoking Intervention by Adrian Jackson  'Lift Your Mask' - Geese Theatre Company in Performance by Andy Watson  Doing Time: A Personal and Practical Account of Making Performance Work in Prisons by Lois Weaver  Part 3: Ethics of Representation  Introduction to Ethics of Representation by Sheila Preston  The War Plays by Edward Bond  On the Political by Chantal Mouffe  Choosing the margin as a space of radical openness by bell hooks  Representing the Other by Wilkinson and Kitzinger  'Fit for a Child?' Artistry and Didacticism in a Theatre in Health Education Programme for Young Children by Joe Winston  'You just made the blueprint to suit yourselves.' A Theatre-based Health Research Project in Lungwena, Malawi by David Kerr  Bearing Witness: (re) positioning the playwright in other people's stories of trauma by Amanda Stuart-Fisher  The Ends of Applied Theatre: Incidents of cutting and chopping by James Thompson  Part 4: Participation  Introduction to Participation by Sheila Preston  Theatre of the Oppressed by Augusto Boal  Selections from the Prison Notebooks by Antonio Gramsci  'Participation' by Majid Rahnema  Participation for Liberation or Incrimination? by Ananda Breed  Altogether Now? Reconsidering the merits of participation in child-rights theatre by Paul Moclair  The complexity and challenge of Participation in North Liverpool: A case-study of Collective Encounters' Living Place Project by Sarah Thornton  The use of dialogical approaches for community theatre by the group Nos do Morro, in the Vidigal favela of Rio de Janeiro by Marica Henriques Coutinho and Marcia Pompeo Nogueria  Part 5: Intervention  Introduction to Intervention by Tim Prentki  Profit over People by Noam Chomsky  When People Play People by Zakes Mda  Drama as Process for Change by Dorothy Heathcote  Theatre as Communal Work: Intervention in Rural Communities by John Somers  Made to Measure: A critical interrogation of applied theatre as intervention with youg offenders in the UK by Hughs and Ruding  Flight Paths: The impact of the politics of a play about asylum by Kathleen McCreery  The Performance of Trauma: Moving on Project, Australia by Penny Bundy  Playback Theatre in Burundi by Jonathan Fox  Part 6: Border Crossing  Introduction to Border Crossing by Tim Prentki  Border Crossings:Cultural Workers and the politics of education by Henry Giroux  Decolonizing the Mind by Ngugi WaThiongo  Re-Locating Memory: Performance, Reminiscence, and Communities of Diaspora by Helen Nicholson  'Is this the Play?' Applied Theatrein a pupil referral unit by Caoimhe McAvinchey  'My People's Blood' Mobilising Rural, Aboriginal populations in Canada around issues of HIV by Jane Heather  Transgressing borders in Portland, Maine by Jan Cohen-Cruz  Part 7: Transformation  Introduction to Transformation by Sheila Preston  Theatre Poems and Songs by Edward Bond  Pedagogy of the Oppressed by Paulo Freire  Synthetic Culture and Development by Renato Constantino  'Are we There Yet?': On the Road to Safer Sex through Interactive Theatre  'The Mothership': Sustainability and Transformation in Clean Break Theatre Company  'Who's got the Power?': Performance with People with learning disabilities by Liselle Terret  Sanctions and Survival Politics: Zimbabwean Community Theatre in a Time of Hardship by Dale Byam  Child Rights Theatre for Development with disadvantages and excluded children in South Asia and Africa by Michael Etherton  Part 8: Applied Theatre and Globalisation  Applied Theatre in a Global Village by Tim Prentki

Tim Prentki is Professor of Theatre for Development at the University of Winchester where he runs the MA in Theatre and Media for Development. He is co-author of Popular Theatre in Political Culture and is on the editorial board of Research in Drama Education.

Sheila Preston is a senior lecturer in Applied Theatre at the Central School of Speech and Drama, University of London. Her research interests are: theatre for development, the facilitator and critical pedagogies, and theatre/performance for social change.