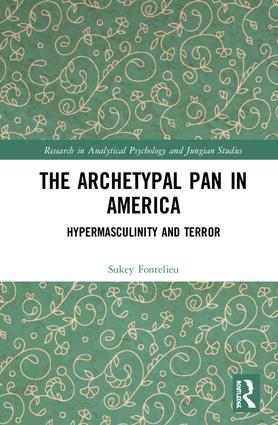 The Archetypal Pan in America

The Archetypal Pan in America examines the complex moral and ethical dilemmas that Americans have had to face over the last few decades, including the motivations for the Vietnam War; who was in control of women’s productive rights; how to extend civil rights to all; protests for the historically unapologetic narrative of the genocide of Native Americans; and the growing number of school shootings since the Columbine massacre. Fontelieu suggests that the emotional pain these issues created has not resolved and that it continues to surface, in the guise of new issues, but with a similar dysfunctional pattern.

The book argues that this pattern acts in the culture in the same manner as a psychological defense system: stimulating fight, flight, or freeze reactions; requiring great stores of energy when activated; and deflecting attention from other areas. Relying on Jung’s theory of the applicability of myth to psychological problems and the post-Jungian theory of cultural complexes, the myths of the Greek god Pan are used to scaffold a metaphor that informs this pattern. Fontelieu proposes that, rather than looking inward as a culture for how to accept its changing role in a global world, this pattern reinforces dysfunctional emotional responses to the reoccurring traumas of modernity, responses such as an increase in the magnetic appeal of hypermasculinity, or choosing to remain naively self-absorbed.

The Archetypal Pan in America

will be of great interest to Jungian analysts and scholars of depth psychology, as well as academics and postgraduate students studying psychology, foreign studies, literary criticism, politics and cultural studies.

"A compelling shadow history of America envisioned through the mythic lens of the god Pan. Both deeply meditative and eminently practical Sukey Fontelieu’s study capture unacknowledged themes percolating throughout the collective psychology of the US from inception to the present. The socio-political analysis displays the potency of an archetypal approach to culture, identifying what has been quite difficult to capture in more mundane analyses. Eschewing easy solutions we are brought to wrestle with our reflections in a silvered mirror of depth psychological craft. Have a long look."

"We live traumatized in an Age of Pan, who, beaten from his deforested wilderness erupts in Terrorism and our response to it. Sukey Fontelieu’s powerful study of the wake of this savage god in wars, mass shootings, an epidemic of rape and the horrifying excesses of hypermasculinity is important in seeing through, and seeing an alternative to, a an era of chaos and panic."

"In a bold Jungian depth psychological analysis of cultural patterns, Sukey Fontelieu addresses the disturbing manifestation of "hypermasculinity" and violence in recent American history. The author argues persuasively that this trend might be viewed as an unconscious expression of the archetype represented by the Greek mythic figure of Pan, evident in states of panic, intolerance of the "other," and bloodlust for war. If we are to skillfully navigate the challenges of our historical moment, we must, of necessity, bring Pan, and other mythic figures who symbolize the dark instinctual powers of the psyche, more fully into awareness. The Archetypal Pan in America is a timely and important contribution to this great undertaking."

Keiron Le Grice, Ph.D., Chair of the Jungian and Archetypal Studies Specialization, Pacifica Graduate Institute, California; author of The Archetypal Cosmos and The Rebirth of the Hero.

"In The Archetypal Pan in America: Hypermasculinity and Terror, Sukey Fontelieu adds her voice to the emerging chorus that is bringing a robust psychological attitude toward our understanding of social and political issues. Her integration of the anxiety of the individual, the horrors of our current political circumstances, with key archetypal patterns of thought, feeling, and behavior represented by the god Pan opens a door to imagine the opportunities for the psychologically-minded person or group to find remedies for this cultural complex. Her impassioned and clear writing requires we respond to the living experience of terror we are being subjected to by the devolving hyper-masculinity in all of its disgusting appetites."

Peter T. Dunlap, Ph.D. Author of Awakening our faith in the future: The advent of psychological liberalism. Routledge, 2008).

IV Mythos of Pan: Isolation, Innocence, Panic, and the Battlefield

V Rites of Healing and Scapegoating in Antiquity: Metamorphoses

VII Random Shootings: American Reactions to the Massacre at Columbine

IX American Apathy Toward Sexual Violence: Rape in the Military

Sukey Fontelieu, PhD attended the University of Essex and Pacifica Graduate Institute and is currently a professor in the Jungian and Archetypal Studies Program at Pacifica.