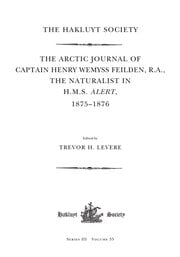 The British Arctic Expedition of 1875–6 was the first major British naval expedition to the high Arctic where science was almost as important as geographical exploration. There were hopes that the expedition might find the hypothetical open polar sea and with it the longed-for Northwest Passage, and it did reach the highest northern latitude to date. The Royal Society compiled instructions for the expedition, and selected two full-time naturalists (an unusual naval concession to science), of whom one, Henry Wemyss Feilden, proved a worthy choice.

Feilden was a soldier, who fought in most of the wars in his lifetime, including the American Civil War, on the Confederate side. On board HMS Alert, he kept a daily journal, a record important for its scientific content, but also as a view of the expedition as seen by a soldier, revealing admiration and appreciation for his naval colleagues; he performed whatever tasks were given to him, including the rescue of returning sledge parties stricken by scurvy. He also did a remarkably comprehensive job in mapping the geology of Smith Sound; some of his work, on the Cape Rawson Beds, was the most reliable until the 1950s. He was an all-round naturalist, and a particularly fine geologist and ornithologist. He was not just a collector; he pondered the significance of his findings within the context of the best modern science of his day: in zoology, Charles Darwin on evolution; in botany, Hooker on phytogeography, and in geology, Charles Lyell’s system. He illustrated his journal with his own sketches, and also enclosed the printed programmes of popular entertainments held on the ship, and verses for birthdays and sledging (there was a printing press onboard).

The journal gives a vigorous impression of a ship’s company well occupied through the winter, then increasingly active in sledging and geographical discovery in spring, before the scurvy-induced decision to head home in the summer of 1876. After his return, Feilden had dealings with many scientists and their institutions, finding homes for and meaning in his collections.

3. Instructions for the Expedition

7. Out of the Ice and Homeward Bound

Appendix A. Letters from Henry Chichester Hart, naturalist in HMS Discovery, to Feilden, received by Feilden in HMS Alert, and inserted by him in his journal.

Appendix E. List of enclosures in Feilden’s journal at the Royal Geographical Society

Trevor Levere taught for many years in the Institute for the History and Philosophy of Science at the University of Toronto, where he was twice Director. There he supervised 22 PhD students, beginning in 1968, and ending with the graduation of his final PhD student in 2018. He is now University Professor Emeritus, a Fellow of Victoria College, and a Senior Fellow of Massey College. He is also a Fellow of the Royal Geographical Society, membre effectif de l’Académie Internationale d’Histoire des Sciences (Paris), a Foreign Member of the Koningklijke Hollandsche Maatschappij der Wetenschappen (Haarlem, NL), and a Fellow of the Royal Society of Canada. His first degree was in chemistry, which he studied at New College, Oxford, but he soon moved to the history of chemistry. Although he constantly returns to that field, he has worked in several other areas of the history of science in the eighteenth and nineteenth centuries, Arctic science and science in Canada among them: his numerous books include Science and the Canadian Arctic: A Century of Exploration 1818–1918 (Cambridge, 1993), for which the first stages of research were carried out at the Scott Polar Research Institute and at Clare Hall in Cambridge. He and his wife Jennifer live in Toronto, and also, in July and August, on Garden Island in Lake Ontario, in a summer home which is just big enough to house the three generations of their Canadian family.