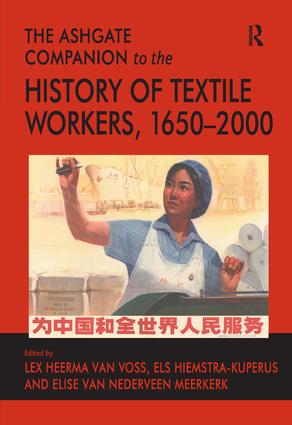 The Ashgate Companion to the History of Textile Workers, 1650–2000

This impressive collection offers the first systematic global and comparative history of textile workers over the course of 350 years. This period covers the major changes in wool and cotton production, and the global picture from pre-industrial times through to the twentieth century. After an introduction, the first part of the book is divided into twenty national studies on textile production over the period 1650-2000. To make them useful tools for international comparisons, each national overview is based on a consistent framework that defines the topics and issues to be treated in each chapter. The countries described have been selected to included the major historic producers of woollen and cotton fabrics, and the diversity of global experience, and include not only European nations, but also Argentina, Brazil, China, Egypt, India, Japan, Mexico, Turkey, Uruguay and the USA. The second part of the book consists of ten comparative papers on topics including globalization and trade, organization of production, space, identity, workplace, institutions, production relations, gender, ethnicity and the textile firm. These are based on the national overviews and additional literature, and will help apply current interdisciplinary and cultural concerns to a subject traditionally viewed largely through a social and economic history lens. Whilst offering a unique reference source for anyone interested in the history of a particular country's textile industry, the true strength of this project lies in its capacity of international comparison. By providing global comparative studies of key textile industries and workers, both geographically and thematically, this book provides a comprehensive and contemporary analysis of a major element of the world's economy. This allows historians to challenge many of the received ideas about globalization, for instance, highlighting how global competition for lower production costs is by no means a uniquely modern issue, and has b

’This massive volume, organized into three parts, covers everything the title implies… Recommended.’ Choice 'An important text for academic libraries.' Reference Reviews 'The book is […] more than comparative labour history and has some elements of a major global study of an industrial sector over time. There are some really penetrating and thought-provoking essays that increase the importance of the volume as a contribution to contemporary debates in global history.' Economic History Review 'A product of the International Institute of Social History, it is an impressive work containing comparative historiography. It is an essential reference…' Labour/Le Travail '… comprehensive… New York Times Magazine