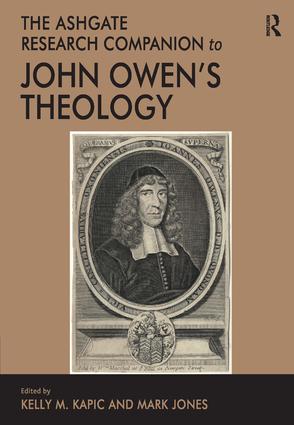 John Owen (1616-1683) is regarded as one of the greatest theologians Britain ever produced. Owen has had an important historical and theological influence, and his significance is widely recognized today. As a revival in Owen studies and reprints has taken place, this much-needed companion by an international group of leading scholars, helpfully explores key questions related to Owen's method, theology, and pastoral practice. Examining his thought through such topics as his epic work on the Holy Spirit, his developed view of faith and reason, and his contribution to the place of toleration, this book offers an authoritative exploration of one of Britain's greatest theologians.

'Scholarly interest in the life and work of John Owen has been growing now for some years, both as part of the renaissance of interest in Reformed theology and as part of the increased prominence given to intellectual history in studies of early modern England. This volume offers an excellent overview of the kinds of scholarship currently being pursued and represents a significant contribution to our understanding of this intriguing figure and his times.' Professor Carl R. Trueman ’John Owen is arguably one of the most important Reformed theologians to have written in the English language. His work demonstrates what is best about constructive theology: a deep and sympathetic engagement with the tradition, a broad understanding of human learning, and an incisive and nimble mind, able to zero in on the most fundamental theological questions. These characteristics are explored in the essays of this volume, which give a snapshot of the state-of-the-art in the recent resurgence of interest in his work. They offer an overview of Owen’s thought, his intellectual context, and his ongoing significance for theology today that places beyond doubt his significance for the wider Church. This is a most welcome Companion to the study of one of the greatest Puritan minds.’ Oliver D. Crisp, Fuller Theological Seminary, USA ’Owen's reputation as one of the most distinguished minds of the seventeenth century is by now well established. This collection of well-informed interpretative essays provides an excellent guide to the range of his thought.’ John Webster, University of Aberdeen, UK '… this is one of the most important places to start when studying John Owen, and it should be read alongside some of the great introductions to Owen’s theology, such as Carl Trueman’s volume in the Great Theologians Series, John Owen: Reformed Catholic, Renaissance Man (2007) also by Ashgate… this will serve those interested in Owen well, providing needed access to a wide-ranging

Kelly M. Kapic is Professor of Theological Studies at Covenant College in Lookout Mountain, Georgia. He is the author or editor of seven books, including Communion with God: The Divine and the Human in the Theology of John Owen, The Devoted Life: An Invitation to the Puritan Classics, and Mapping Modern Theology.

Mark Jones is Senior Pastor at Faith Vancouver Church (PCA) and Research Associate at the University of the Free State (Bloemfontein). He is the author or editor of several books, including Why Heaven Kissed Earth, Drawn into Controversie, and A Puritan Theology.