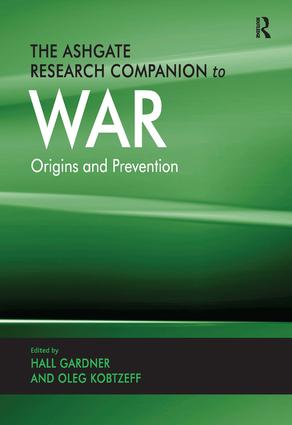 The Ashgate Research Companion to War

Many different social scientists have been challenged by the origins of wars, their immediate causes and the mechanisms leading to the breakdown of peaceful relations. Many have speculated whether conflicts were avoidable and whether alternative policies might have prevented conflict. The Ashgate Research Companion to War provides contributions from a number of theorists and historians with a focus on long term, systemic conflicts. The problèmatique is introduced by the Editors highlighting the need for interdisciplinary approaches to the study of war as a global phenomenon. The following 29 essays provide a comprehensive study guide in four sections: Part I explicates differing theories as to the origins of war under the general concept of 'polemology'. Part II analyzes significant conflicts from the Peloponnesian wars to World War II. Part III examines the ramifications of Cold War and post-Cold War conflict. Part IV looks at long cycles of systemic conflict, and speculates, in part, whether another global war is theoretically possible, and if so, whether it can be averted. This comprehensive volume brings us a much needed analysis of wars throughout the ages, their origins, their consequences, and their relationship to the present. A valuable understanding that is ideal for social scientists from a variety of backgrounds.

'Rich and diverse in terms of sources and perspectives, these assembled essays combine international relations theory with history. Addressing some of the great puzzles of statecraft, such as the origin of World War I, these essays will find a valued place in the classroom.' Charles F. Doran, Johns Hopkins SAIS, USA '… a weighty tome that takes an interdisciplinary […] approach to the study of war… Recommended.' Choice 'This broad-ranging, interdisciplinary and transatlantic conversation looks at war from new angles, focusing on the multilayered deep structures and systems underlying surface events. From Azar Gat's brilliant overview of human warfare to the causes of World War I and the rise of China, this thought-provoking collection views a familiar landscape of themes and events from new perspectives.' Joshua S. Goldstein, American University, USA (emeritus) 'The essays in this volume cover an admirable range of topics, including the evolution of modern warfare, the role of gender in conflict, the role of the state and Anarchist critiques of warfare, cyber-conflict, child soldiers, and the future of asymmetric conflict. Many of these essays are useful summaries of the literature and would be a valuable resource for students beginning to work in those areas… the volume takes an important step forward by translating the writings of some key French thinkers on war, such as Jean-Paul Charnay, while bringing the insights of others to the attention of English-speaking audiences… If one wishes to adopt or even learn more about the polemological approach, these essays are fascinating.' Perspectives on Terrorism 'As befits the title ’research companion’, this volume of collected works on the topic of war by Professors Hall Gardner and Oleg Kobtzeff of the American University of Paris provides a detailed exposition of the causes of war through the theoretical lens of ’polemology’. Those embarking on the journey through this book will find a number of

Contents: Preface; General introduction; polemology, Hall Gardner and Oleg Kobtzeff; Part I Alienation, Legitimacy, and the Roots of War: Alienation and the origins and prevention of war, Hall Gardner; The roots and evolution of conflict: from Cain to the present, Azar Gat; Gender and the causes, tactics and consequences of war, Debra L. DeLaet; Age of progress or 'age of extremes'?: the escalation of warfare in modern times and the nature of its mutation, Oleg Kobtzeff; The state as a cause of war: anarchist and autonomist critiques of war, Andrew Robinson; Majority rule - a cause of war?, Peter Emerson; The legitimacy of war - toward a new principle for intervention, with its application to the Iraq War of 2003, Troy Davis. Part II Major Wars in History: From innovative democracy to warfare state: ancient Athens as a model of hegemonic decline, Athina Karatzogianni; Origins of Arab-Israeli conflicts in the 'Greater Middle East', Marco Rimanelli; A 'time of troubles': war in an age of planetary upheaval, from the end of the Middle Ages to 1648, Oleg Kobtzeff; Napoleonic wars: art of war, diplomacy and imperialism, Marco Rimanelli; War and the sacred: Russian-Ottoman conflict, 1876-1878, Ilya Platov; The failure to prevent World War I , Hall Gardner; World War I in history, Anthony D'Agostino; Totalitarian times - total war, global war: the roots of World War II and the nature of the conflict, Oleg Kobtzeff. Part III Cold War and Beyond…: NATO as a war-preventive organization: Cold War vs. World War III, Marco Rimanelli; The Cold War and the media: lessons from America in Vietnam, Steven Ekovich; NATO as post-Cold War humanitarian and peacekeeping organization, Marco Rimanelli; NOT a clash of civilizations: the conflict in Kosovo revisited, Oleg Kobtzeff; Child soldiers: the pursuit of peace and justice for child combatants, Susan Hitchcock Perry; The instrumentalization of gender in war, Carol Mann; Wars and climate: the effects of climatic change on secu