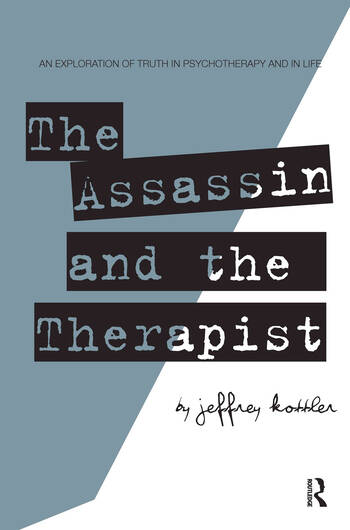 The Assassin and the Therapist: An Exploration of Truth in Psychotherapy and in Life

Many therapists have likely worked with a client who has caused the therapist to confront his most cherished beliefs, or has changed the therapist in ways that forever altered the way he performs therapy, looks at the world, and sees himself. The author of this book found himself in just such a situation, causing him to begin his own search for truth. This book is the result of his search; it explores the nature of truth in psychotherapy and in the therapist’s life, examining some of the things that are often denied and rarely spoken about.

This book contains two parallel narratives: the first tells the story of Jacob, a man in his seventies, who lived through one of the most dramatic periods in history and actually altered events through his acts of violence. Following him from his childhood to his recruitment, training, and life as an assassin, it is a tale of intrigue, of adventure and courage, but one that also raises a number of profound moral issues. The reader will find several unexpected but significant themes scattered throughout Jacob’s story which, upon close examination, have significant implications for the ways therapists think about their work and their relationships with clients.

The second narrative details the author’s struggles as a therapist as he tries to make sense of his doubt, imperfections, and self-deceptions. The reader will join him on his search for truth in both psychotherapy and life. His story becomes a lesson for digging deep into the complex and ambiguous nature of what therapists do and what they think they learn in their work.

A greatly unique and fascinating work, readers will find themselves both enthralled in and changed by Jacob’s story and the author’s journey.

How this Story Came to be Told. Part I: An Assassin’s Story. First Mission. The Bronx. Recruitment. Training. Prison. Parade. Truce. Capture. Return. Afterword. Part II: A Therapist’s Story. A True Story Based on a Lie? Not the End of the Story. What is Truth and What Does is Really Mean? What is Truth in Psychotherapy? What Do We Believe and Whom Do We Trust? Clinical Implications Related to Working with Lying in Therapy. When the Therapist Catches Despair.

"Kottler construct[s] a startling narrative, which reads as well as any detective story...written with searing honesty. Kottler does not flinch from examining his own part in co-creating a story that may (or may not) be a lie...Kottler has written a story which invites the reader to consider their own practice, and the place in that, not only of falsehood and truth, but the therapist's role in that...For those interested in looking more deeply at the nature of the unconscious play of forces between therapist and client, go to Kottler. The question the reader is left with at the end is this. Is Jacob's story real, or were the two of them complicit in developing a work of fiction? Perhaps we should be asking that of ourselves more often." - Heather Dale, MBACP, The Independent Practitioner

"A great book to spur conversation and discussion among therapists. I would highly recommend it to a peer group, book study group as it has great potential to ignite conversations among professionals...The strength of Kottler's work is that it doesn't give any answers, something that I deeply appreciated. He challenges us to embrace uncertainty and the unknown. The Assassin and the Therapist is a great book exposing the limitations of certainty and managed care in the current mental health field and challenges therapists to confront their own discomfort around embracing uncertainty.The Assassin and the Therapist has constructed a magnificetn ground for exploration among therapists, philosophers and clients alike." - Justin Rock, Journal of the Society for Existential Analysis