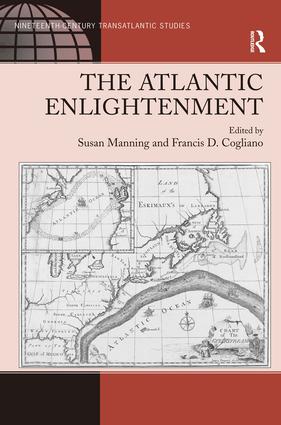 Transatlantic studies, especially during the enlightenment period, is of increasing critical interest amongst scholars. But was there an Atlantic Enlightenment? This interdisciplinary collection harnesses the work of some of the most prominent figures in the fields of literature; intellectual, cultural, and social history; geography; and political science to examine the emergence of the Atlantic as one of the key conceptual paradigms of eighteenth century studies. In this spirit, the contributors offer new insights into the conditions that generated a major transatlantic genre of writing; addressing questions of race, political economy, and the transmission of Enlightenment ideas in literary, political, historical, and religious contexts. Whether examining John Witherspoon's evolution from Calvinist theologian to Revolutionary theorist, or Adam Smith's reception in the antebellum United States, the essays remind us that the transatlantic traffic in ideas moved from west to east, from east to west, and in patterns that both complicate and enrich what we thought we knew about the vectors of transmission in this pivotal period.

'Stimulating and thought provoking. This first rate collection of essays explores a variety of intersecting national and disciplinary Enlightenments, and models a range of productive approaches to Transatlantic Studies. It also usefully contributes to current rethinking of "the" Enlightenment.' Eve Tavor Bannet, University of Oklahoma, USA ’…a learned and professional compilation that makes a solid contribution to the burgeoning literature of transatlantic studies.’ Richard Gravil, author of Romantic Dialogues: Anglo-American Continuities, 1776-1862 ’Susan Manning and Francis D. Cogliano have collected an interesting and insightful series of essays defining and exploring aspects of the 'Altantic' Enlightenment. …this collection of essays is remarkably successful in promoting both a broader Atlantic perspective on the Enlightenment and a more interdisciplinary approach to its study.’ Eighteenth Century Scottish Studies ’The cast of contributing scholars is an impressive and carefully constructed mixture of established and emerging scholars from a range of disciplines. All of the essays are well written, accessible to scholars outside their respective disciplines, and thoroughly researched…’ Journal of British Studies ’… a very timely contribution to a developing field of study. As events such as The Idea of America show, the concept of Atlantic scholarship is proving highly useful for scholars across disciplines and periods, and this book outlines a number of different critical approaches which will help to define and complicate both the Atlantic Enlightenment, and the Atlantic nineteenth century.’ 19, Interdisciplinary Studies in the Long 19th Century ’By presenting the work of geographers and literary scholars as well as historians, this volume offers a set of richly textured, multidisciplinary essays that substantially broadens our understanding of this newer approach, especially as it applies to the English-speaking North American

Focusing on the long nineteenth century (ca. 17501900), this series offers a forum for the publication of scholarly work investigating the literary, historical, artistic, and philosophical foundations of transatlantic culture. A vital field of interdisciplinary investigation, transatlantic scholarship contextualizes its objects of study in relation to exchanges, interactions, and negotiations that occurred between and among authors and other artists hailing from both sides of the Atlantic. As a result, transatlantic research calls into question established disciplinary boundaries that have long functioned to segregate various national or cultural literatures and art forms, challenging as well the traditional academic emphasis upon periodization and canonization. By examining representations dealing with such topics as travel and exploration, migration and diaspora, slavery, aboriginal culture, revolution, colonialism and anticolonial resistance, the series offers new insights into the hybrid or intercultural basis of transatlantic identity, politics, and aesthetics. Please note, this series is done commissioning and will no longer be taking submissions.