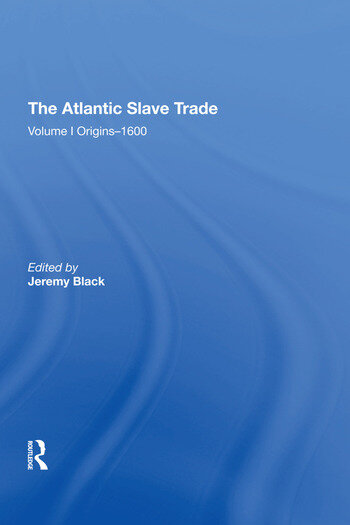 Covering the Atlantic slave trade from its origins to 1600, the essays in this collection look at the reasons for the causes of slavery and serfdom, slavery in Africa, the development of the slave trade, the demographic situation in Latin America and European attitudes to slavery as an institution.

Contents: Introduction; The causes of slavery or serfdom: a hypothesis, E.D. Domar; Some considerations relating to property rights in man, S. Engerman; The volume of the Atlantic slave trade: a synthesis, Paul E. Lovejoy; The inter-Atlantic paradigm: the failure of Spanish medieval colonization of the Canary and Caribbean Islands, A.M. Stevens-Arroyo; Waranga, Akan and the Portuguese in the 15th and 16th centuries, I. Wilks; Slavery in Africa and the slave trades from Africa, Janet J. Ewald; Slaves and society in Western Africa, c. 1445-c. 1700, J.D. Fage; Estimating aboriginal American population: an appraisal of techniques with a new hemispheric estimate, Henry F. Dobyns; The Indian population of North America in 1492, J.D. Daniels; The Tainos of Hispaniola, F. Moya Pons; Indian labor and new world plantations: European demands and Indian responses in northern Brazil, S.B. Schwartz; Cultural change and military resistance in Araucanian Chile, 1550-1730, R.C. Padden; From Indian to slave: forced native labour and colonial society in Sao Paulo during the 17th century, John M. Monteiro; Iberian expansion and the issue of black slavery: changing Portuguese attitudes 1440-1700, A.J.R. Russell-Wood; English trade with the Portuguese empire in West Africa, 1581-1629, J.W. Blake; Protestants as pirates, slavers and proto-missionaries: Sierra Leone 1568 and 1582, P.E.H. Hair; From Africa to the Americas: ethnicity in the early black communities of the Americas, Colin A. Palmer; Index.