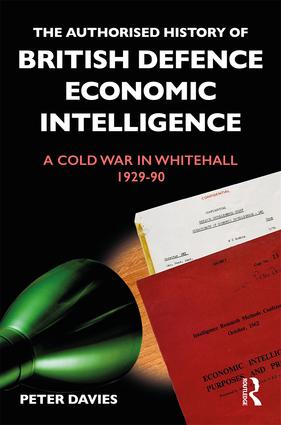 This book is the first history of UK economic intelligence and offers a new perspective on the evolution of Britain's national intelligence machinery and how it worked during the Cold War.

Intelligence in Whitehall was not conducted in a parallel universe. This contrasts with the conventional wisdom which accepts the uniqueness of intelligence as a government activity and is symbolised by the historical profile of the JIC. The study draws on the official archives to show that the mantra of the existence of a semi-autonomous UK intelligence community cannot be sustained against the historical evidence of government departments using the machinery of government to advance their traditional priorities. Rivalries within and between agencies and departments, and their determination to resist any central encroachment on their authority, emasculated a truly professional multi-skilled capability in Whitehall at the very moment when it was needed to address emerging global economic issues.

This book will be of much interest to students of British government and politics, intelligence studies, defence studies, security studies and international relations in general.

'An authoritative study of the history of economic intelligence in the UK has been long overdue and this book fills the void. Peter Davies was a professional colleague of mine for many years and an excellent intelligence analyst. In particular his first-hand experience during the Cold War has enabled him to produce a definitive depiction of the work of the Directorate of Economic Intelligence in the Defence Intelligence Staff. His scrupulous research shows how much depended on profound understanding of the economic underpinnings of the Soviet and Warsaw Pact regimes, including their weapons production programmes. Here DEI analysts were usually the first to spot new systems under development. The book is essential reading for any student of British economic history in general and Cold War intelligence in particular.'--John N. L. Morrison, Deputy Chief of Defence Intelligence 1995-99

'Peter Davies has done what he set out to do - to shed light on the "Dark Matter" of the economic side of defence intelligence in Whitehall, especially during the first Cold War. He combines the rigour of the scholar with the gimlet eye of the insider.'--Professor Peter Hennessy, Queen Mary, University of London

1. A New Field of Intelligence

4. Planning for the Future

5. The Origins of the Joint Intelligence Bureau

7. The Joint Intelligence Bureau and Whitehall

9. Economic Intelligence for the Ministry of Defence 1946-91

11. The British Way of Economic Intelligence

13. The Fate of the Directorate of Economic Intelligence

Formerly an intelligence analyst at the Defence Intelligence Staff, Secret Intelligence Service, and Cabinet Office, Peter Davies has a PhD in History from Queen Mary, University of London and is currently affiliated to Drew University, NJ, USA.